After getting lost while kayaking off New York’s Long Island, Russell Crowe shows us that even a bad-a** who has swept in to save the day as everything from a gladiator to a gun-slinging cowboy needs a helping hand from time to time. 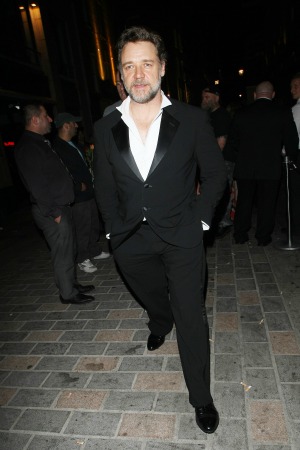 The Associated Press reports that actor Russell Crowe and a friend set off from Cold Spring Harbor on New York’s Long Island Sound Saturday afternoon. But when the Coast Guard found them much later that evening, they were nearly 10 miles east of where they had set out — in Huntington Bay.

The Coast Guard apparently had been patrolling the area when they heard a voice calling out for help at around 10 p.m.

Even when the 48-year-old actor paddled toward the patrol boat, U.S. Coast Guard Petty Officer Robert Swieciki told the AP that he didn’t recognize the star.

How Russell Crowe got back into “fighting shape” >>

“He just needed a little bit of help, he just got a little lost,” Swieciki said.

The petty officers reportedly ferried the lost actor and his friend back to the harbor, and Crowe early Sunday morning tweeted a “thank you” message to his “rescuers,” confirming they’d been out on the water for 4-½ hours.

Ironically, Crowe was in Long Island filming the biblical epic, Noah, which is scheduled for a 2014 release.

Relax, Crowe is hardly a “landlubber”; he was surrounded by water growing up in New Zealand, the pair were wearing their life vests and Swieciki noted that the star seemed like a “fairly experienced kayaker.”

19 mins ago
by Scarlett Harris