Rihanna has been on a Rob rampage lately — she’s been clubbing with Rob Kardashian and texting Robert Pattinson. Apparently, she has picked a Rob to date. 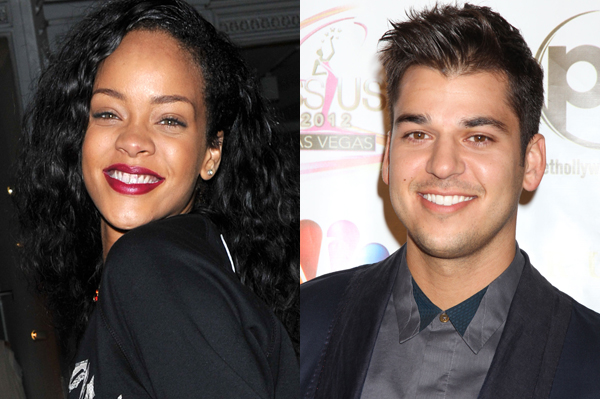 Rihanna’s been busy over the past couple of weeks. First, she was spotted go-carting and clubbing with Rob Kardashian, and then it was rumored she was sexting newly single actor Robert Pattinson. So, who reportedly has won the key to RiRi’s heart? It’s aspiring lawyer — and noted liar — Rob Kardashian!

“Rihanna and Rob have been flirting for a while,” a Kardashian source told US Weekly. Another source added that they were “sitting closely at the club [on their Aug. 25 date], whispering in each other’s ears and clearly flirting.”

It makes sense that Kardashian would be attracted to Rihanna — he’s been casually seeing her look-alike competitor, Rita Ora, for the past several months. However, we think he’ll just end up getting his heart broken, thanks to her lingering obsession with ex-abuser Chris Brown.

“I lost my best friend,” Rihanna told Oprah in her recent Oprah’s Next Chapter interview. “Like everything I knew was switched. Switched in a night. And I couldn’t control that. So I had to deal with that, and that’s not easy for me to understand or interpret. And it’s not easy to interpret on camera, not with the world watching. So it’s hard for me to even pay attention to my mind and figuring things out because it now became a circus,” Rihanna added.

Or, maybe Pattinson will come calling after he gets over Kristen Stewart. She’s been reportedly sending him sexy texts to cheer him up since Stewart’s cheating scandal came to light.

“They’ve met several times at award bashes over the years,” a source allegedly told OK in mid August. “RiRi thinks he’s very cute, but nothing ever came of it because he was attached to Kristen — and it’s not her style to steal someone else’s man.”

We never would have guessed they were a couple, but stranger things have happened — ahem, Avril and Chad.