The gorgeous Ben Barnes and sexy Bradley Cooper make for an eye-catching cast in The Words. But Barnes admits even he gets a little self-conscious sometimes. 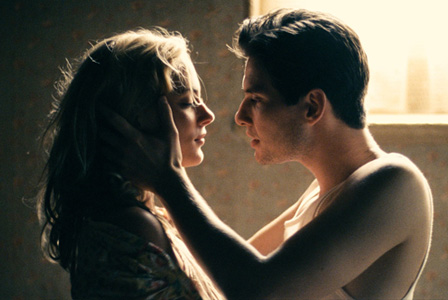 Though he may not have very many actual lines in The Words, actor Ben Barnes tells SheKnows he was absolutely delighted to join the star-studded cast of this literary drama.

“It’s such an ambitious title,” Barnes told SheKnows. “I thought it was such a fabulously constructed story. I thought the characters felt real and they were sewn together so cleverly.” Watch our interview with Ben Barnes.

The movie explores the role of fate in our lives, and how choices or chances change our destiny. So we asked the 31-year-old actor if he ever questioned his choice to become an actor.

“All the time,” Barnes said. “I think all actors do. We’ve been cursed with a lack of self-confidence. I think most actors go home and have massive crisis of confidence and think, ‘Why am I special? Why do I get to tell this story?’ I hide behind other people’s words, and people dress me up. I’m basically a glorified Ken doll.”

Though Barnes is certainly as attractive as Ken — he played Prince Caspian in The Chronicles of Narnia — it’s a stretch to call him a doll. He actually has very few words to hide behind in The Words. The power of his performance comes all from his actions, something only a talented actor can achieve.

“I’m actually really proud of it and proud to be a part of it,” Barnes told SheKnows. “You have those moments (of doubt), and then you have other moments when you see something like this, and that makes it utterly worth it.”

Be sure to catch Ben Barnes and his sexy co-star Bradley Cooper in The Words, in theaters today!

More on The Words