The trailer used for the new Elizabeth Taylor biopic was reportedly trashed, and the owner thinks Lohan is responsible. 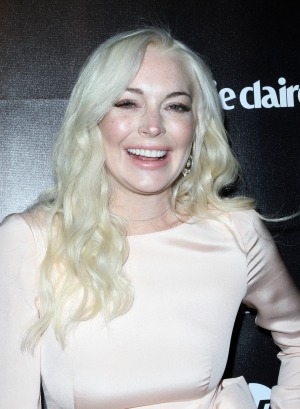 It looks like Lindsay Lohan may be at it again. A woman is claiming the actress trashed her trailer while it was being used for the movie Liz & Dick.

In June, Angel Alger spent her life savings, around $50,000 on the trailer Elizabeth Taylor used during the filming of Cleopatra.

“Fox Studios spent more than $75,000 in 1963, about a half million in today’s dollars, to create an environment fit for the queen Taylor was playing,” CNN said. “She rested away from the set between roman columns with walls and ceilings hand-painted in the style of Cleopatra’s era.”

Two days after Alger’s purchase, she says she lent it to Silver Screen Pictures for Lohan’s use. But the agreement wasn’t exactly Alger’s choice. According to CNN, the seller of the trailer was already under contract with the film company, so it was a condition of sale for Alger that she would have to lend it to the company.

“I was specifically told that it would come back in pristine condition and in even better condition than it was at that time,” Alger told CNN.

But when she was given the trailer back in early July, she claims there was $100,000 in damage done. Alger said there were cigarette burns on the fabric and furniture, and even on a picture of Taylor, CNN said. There also were numerous broken items, including dishes. Alger said there are also many items missing.

“I did not get to enjoy using the lavish French phone that she used or even her personal hairbrush that probably still had some of her hair in it,” she said.

Alger said she contacted the studio, which initially toured the trailer with their insurance company, but since then has not returned her calls. When CNN reached out to the film company, the executive producer did not return its calls. Lohan’s rep has since said the actress had nothing to do with the damage.

Liz & Dick is set to premiere on Lifetime on Nov. 3.