A lawman and a mob boss are pitted against each other in 1960s Las Vegas. 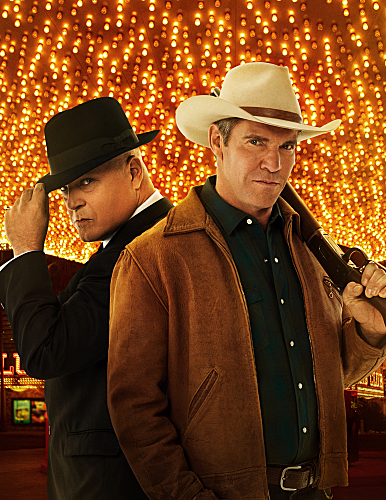 In this hourlong drama inspired by a true story, Las Vegas Sheriff Ralph Lamb (Dennis Quaid) must bring order to 1960s Las Vegas. With outsiders encroaching on the Las Vegas he has known, Lamb, a fourth-generation rancher, and former military police officer, is tasked with stopping the corruption that threatens the simple life he desires.

When a casino worker is murdered, the mayor enlists Lamb’s help to investigate, making him sheriff. This puts Lamb in the sights of his main adversary in this battle, Vincent Savino (Michael Chiklis), a cold-blooded Chicago gangster hungry for control over what Las Vegas will become. The two powerful, headstrong men will stop at nothing to ensure the success of their respective plans to win control of the burgeoning Sin City.

Lamb deputizes his brother Jack (Jason O’Mara) and his son Dixon (Taylor Handley) to help him in his assignment to keep the peace in Las Vegas. Along with Assistant District Attorney Katherine O’Connell (Carrie-Anne Moss), Lamb and his crew must preserve law and order in a town quickly devolving into a hotbed of crime and mob activity.

Full of action and intrigue, and set in front of the beautiful backdrop of the Mojave Desert, Vegas is a thrilling drama full of all the excitement Las Vegas has to offer. Part mobster story, part old-school western, what happens in Vegas is sure to keep you glued to your TV screen.

There are tons of good shows coming this fall! Also, check out…