Holly Madison excitedly announced her pregnancy on Wednesday, but her news is tinged with a bit of uncertainty: Her boyfriend, Pasquale Rotella, is facing 13 years in the slammer for embezzlement. 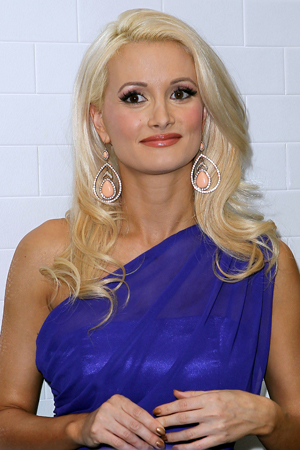 “I’ve always wanted to be a mom,” the 33-year-old told US Weekly, “but I thought it would take longer!”

However, she has some bad news to go along with it: Her boyfriend — and the father of her unborn child — is facing some serious time in prison on 29 counts of bribery, embezzlement, conspiracy, and conflict of interest.

Pasquale Rotella, the CEO of an electronic concerts promotion company, was indicted in April for allegedly trying to swindle millions from City of Los Angeles officials in connection with raves at the city’s Memorial Coliseum.

Rotella — and the five others charged — face 13 years and eight months in prison if they’re convicted. However, his lawyers say that Rotella “has always acted lawfully and appropriately with respect to all of his dealings with the Los Angeles Memorial Coliseum,” and said the charges are “completely baseless and flat-out wrong,” according to People.

The lawyer added that the charges are “politically motivated and publicity driven. Mr. Rotella will vigorously defend himself to clear his good name and looks forward to being completely vindicated.”

He’s currently out on bail and will be back in court on Sept. 25. Madison said she’s 12 weeks along, so her boyfriend could be in prison before she even has the baby. However, he’s excited about his future role as daddy.

“Holly and I are so excited to announce that we are going to be parents,” he told People on Wednesday. “We’re in love and counting down the days until we meet our beautiful baby. I can hardly believe how lucky I am.”