Pink’s come a long, long way since a drug overdose in 1995. Revealing the experience that scared her off the illegal stuff for good, the singer boasts about her “F*** You” fund that allows her to say “no” anytime she damn well pleases. 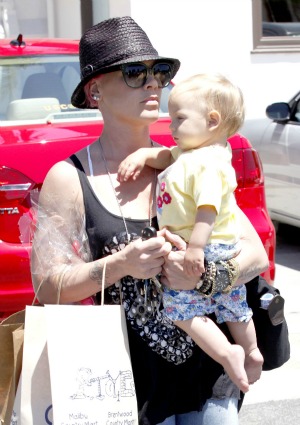 The depth of Pink’s drug use history has come to light with the admission of an overdose in 1995. The life-changing experience helped the 32-year-old, now the healthy and wealthy mother to 15-month-old Willow, relate to her role as a sex addict in the upcoming movie Thanks for Sharing.

“Because I understand addiction,” Pink explained of relating to her character, Dede, “I was a hard-core partyer from 12 to 15. (I was) on all the club drugs… selling ecstasy and crystal meth and Special K.”

The singer’s big wake-up call came when she was still just a teen. “I overdosed in ’95,” Pink revealed of her OD scare. “And then I never took drugs again, ever.”

Pink heads to the big screen >>

Since that 1995 overdose, Pink’s come a long way. Today, she’s not only a proud mom to daughter Willow Sage and wife to Carey Hart, she’s a businesswoman with a solid “F*** You” account to her name.

“When I first started, L.A. Reid said, ‘Make sure you put money into your F*** You account,” Pink recalled to Entertainment Weekly of the advice her former label head shared long ago. “That’s the account that, one day when people ask you to do things you don’t want to do, you say ‘F***you.’ I make sure that my F*** You account is OK, so that you never have to make decisions based on money. I feel like that’s where people kill their careers.”

Pink’s new album will tell us the truth about love >>

Thanks to her offensively named yet remarkably awesome fund, Pink, whose album The Truth About Love is due out Sept. 18, has had no problem turning down reality television offers thrown her way.

“It’s not gonna happen,” the singer said. “It’s not that I don’t want to do one, it’s just out of spite for everyone else doing one and it being so f***ing annoying. I believe that ours would be very entertaining, but no thank you.

“I’ve been asked to do American Idol and X Factor. I’m an Ed McMahon kind of girl. Star Search? I’m in, all day long. It felt more authentic, and the market wasn’t oversaturated with karaoke contests. It’s just not for me.”