The 65-year-old actress has been seen out with her 34-year-old semi-pro ping-pong business partner a lot more recently, but they have reportedly been a couple for the past two years. 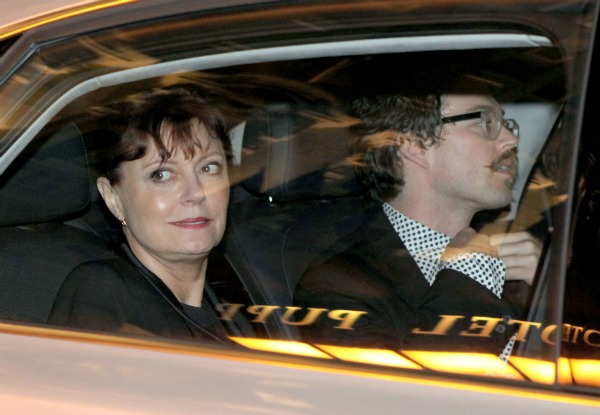 Susan Sarandon is getting hers. The actress has been divorced from Tim Robbins for three years now, and she was seen this week out with a younger man. Rather, a much younger man.

“The Thelma & Louise actress was photographed indulging in some PDA with her… beau Jonathan Bricklin at the U.S Open in New York on Tuesday,” said Yahoo!.

Bricklin is also Sarandon’s business partner in her ping-pong bar business, SPiN, in New York. But the relationship isn’t a new one. Sarandon and Bricklin have reportedly been together for two years, although Sarandon didn’t confirm it until a few months ago. In an interview with People, she talked about her 34-year-old boyfriend.

But she didn’t exactly call him her boyfriend. “Dating is such a stupid word,” she told the magazine. “You can say we are collaborating in a lot of different areas.”

The couple was said to be “collaborating” while watching the tennis tournament Tuesday.

“Bricklin… held Sarandon’s hand and even massaged her shoulders while they sat in the stands and watched the ball get batted back and forth just as they often do at their business, albeit on a much larger court,” reported Yahoo!. Bricklin seems to agree with Sarandon’s definition of their relationship; his Facebook page has his relationship status listed as “It’s Complicated.”

Sarandon has played her share of cougars. She made a guest appearance on Friends, where she played a retiring soap star who hooked up with Joey (Matt LeBlanc). She also has a recurring role on 30 Rock, where she plays a recently released prisoner. The character is a teacher was sent to prison for falling in love with Frank (Judah Friedlander) when he was a child — and her student.

Sarandon was divorced in 2009, after a 23-year marriage to Tim Robbins, who at 53 is also much younger than the actress. The couple had two children together, now 22 and 19. But Sarandon also has a 27-year-old daughter, who is much closer in age to Bricklin than the 65-year-old actress.