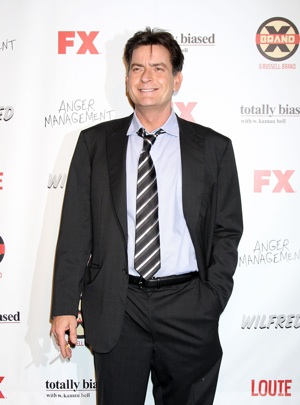 How much Charlie Sheen do we really need? The FX cable network just made a huge investment in the actor’s new show, Anger Management. Following its debut season, FX has ordered another 90 episodes.

How did Sheen score such a sweet deal? According to The Hollywood Reporter, the show’s distribution contract states that if it hits a certain ratings threshold (over the course of its run), it gets a 90-episode back order.

The specific ratings number is undisclosed, but the show maintained 4.53 million viewers its first nine weeks on air. Therefore, we assume the threshold is somewhere in the 3 to 4 million range.

“We set a very high ratings bar that included some additional hurdles for Anger Management to earn its back-90 order, and the series met and exceed those metrics. [Creator] Bruce Helford has created a sitcom that works extremely well in our pre-10 p.m. programming lineup. Charlie Sheen and the entire cast did an amazing job in the first 10 episodes, which were produced in a very tight window. I have no doubt that the producers and cast will be able to pull off the Herculean task of producing 90 episodes over the next two years.”

Anger Management will resume production Sept. 24, although its writers have been back since July. The new season is scheduled to premiere in January.

Aside from Sheen, the show stars Selma Blair and Shawnee Smith and will feature an occasional appearance by Martin Sheen as Charlie’s dad. Surprise!

Are you ready for more Anger Management?