Category 1 Isaac a “kitten” compared to fierce Category 4/5 Katrina? Try telling that to MSNBC host Melissa Harris-Perry, who tweeted about the loss of the home she and her husband had been restoring — a casualty of hurricanes for the second time. 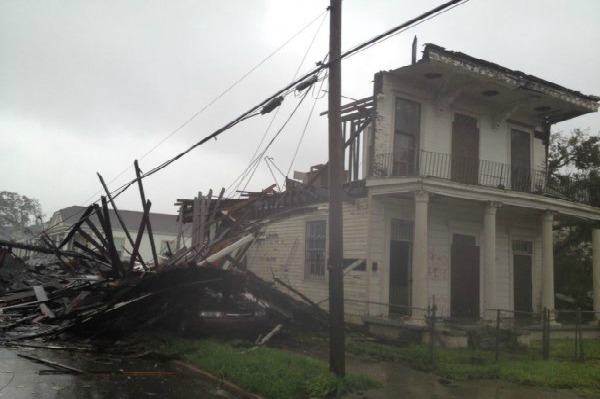 Early Wednesday afternoon, MSNBC host Melissa Harris-Perry thanked well-wishers for their “kind words and prayers” after she announced her new home was destroyed by Hurricane Isaac earlier that day.

“On Saturday’s @MHPShow I’d just given a tour of the home we lost today,” Harris-Perry said, referring to the show that bears her name.

She also posted a link to the story, which features the host and columnist (who doubles as a professor at Tulane) showcasing the New Orleans home her family was fixing up.

The home had been abandoned seven years before, during Katrina.

Harris-Perry cheekily referred to it as a fixer-upper (it was missing some walls).

The tour of her new home coincided with the seventh anniversary of Katrina hitting land.

She tweeted a photo of what was left of the home Wednesday (pictured here) — now the casualty of not one but two hurricanes.

“Feeling sad. #Isaac took the home @JamesHPerry and I just bought,” Harris-Perry wrote. “All safe. House was vacant except for my dreams.”

Prior to reporting how the hurricane landed right on her doorstep, Harris-Perry had been tweeting updates about the storm as it gained strength.

Wednesday morning, CNN was reporting that Isaac’s 9- and 12-foot-high storm surges were topping 8-foot levees, and that the storm had left 500,000 people without power throughout Arkansas, Louisiana and Mississippi — with most of the outages around NOLA.

Previously, officials with the National Hurricane Center had expressed concern that residents in a disaster-fatigued New Orleans wouldn’t take a Category 1 storm like Isaac seriously — especially after Katrina, which hit landfall as a Category 3 and eventually gained strength as a 4 and 5.

Early Wednesday, CNN’s Rob Marciano noted that the majority of the more than 150 people who had to be rescued from flooding were within “mandatory evacuation zones.”