Kim Basinger and Mickey Rourke steamed up the big screen together in 9 1/2 Weeks back in the ’80s. Now they’re co-starring in a new film. The big question: Are there sex scenes? 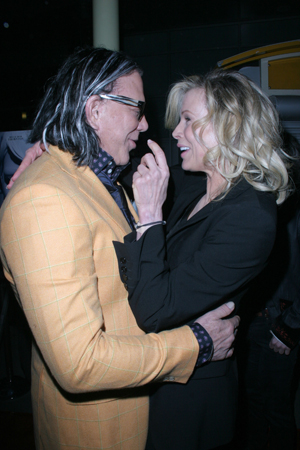 The list goes on and on. But, what about putting Mickey Rourke in the role? “Gasp!” you exclaim. “The Wrestler guy with all the weird plastic surgery?” Yep, that guy. He might not look like leading man material now — thanks to plastic surgery — but he was every woman’s fantasy back in 1986 when he starred with Kim Basinger in 9 ½ Weeks. The steamy on-screen duo was scandalous for the time, but it was a defining moment for both actors.

Now these two are set to reunite on the big screen in the political thriller Black November, currently shooting. No word if the pair will have scenes together, but if they do, we’re hoping the chemistry is still there.

And how do these two feel about each other? It appears the love is still there. Rourke even got emotional in 2009 when he recalled a letter Basinger send him about The Wrestler.

“Coming from her, it was very special and it was very generous and heartfelt letter. It brought me to tears, really,” he said at the time.

He’s not always so gracious about his co-stars, though: Rourke made a catty comment about one of his recent female leads, though he never named names.

“I worked with an actress recently who, despite having a reputation as a ‘good actress,’ s***s herself when that little red light comes on,” he told MovieHole.net while promoting Iron Man 2 in 2010. “She’s fooled everyone into thinking she’s a lot better than she is. Working with someone like that is a pain in the ass, ya know?”

We wonder whom he could be talking about: Gwyneth Paltrow seems like a likely candidate for that, don’t you think? Or maybe Marisa Tomei? Guess we’ll never know.