Lindsay Lohan had been hiding away from the troubles (she creates) at “sanctuary to the stars,” Hollywood’s historic Chateau Marmont. But now it looks like she’ll have to find another escape, as its general manager is giving the ne’er-do-well sometime-actress the boot — after she allegedly racked up tens of thousands of dollars in unpaid charges. 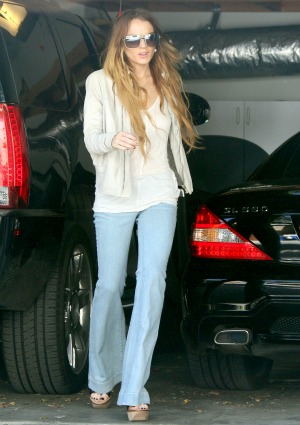 The day after police confirmed that Lindsay Lohan is being investigated for stealing $100K in jewels during a house party, TMZ is reporting the troubled star is banned from Hollywood’s celebrity haven, the Chateau Marmont.

Citing a letter the gossip site obtained from the general manager, Lilo owes the hotel more than $46,000.

The hotel allegedly requested payment on multiple occasions for the stretch of time where Linds was actually living there — 47 days in June and July.

What in Suze Orman hell was the celebutante doing to leave behind such an outstanding/astounding bill?

TMZ sheds some light on the big spender:

In star terms, these expenses may sound like a drop in the bucket. The thing is, Lindsay ain’t no Tom Cruise.

A quick search of Linsday’s current net worth results in the widely reported figures of $1.4 million to $2 million. That’s a far cry from the starlet’s Freaky Friday and Mean Girls famedom.

And, while Lindsay may just be a klepto, between the alleged thefts and the unpaid bills, her actions scream “Money problems!”