With her sparkling debut novel, How Lucky You Are, Kristyn Kusek-Lewis proves she’s an author to watch. A compelling book about female friendship and love, it’s our pick for a must-read. 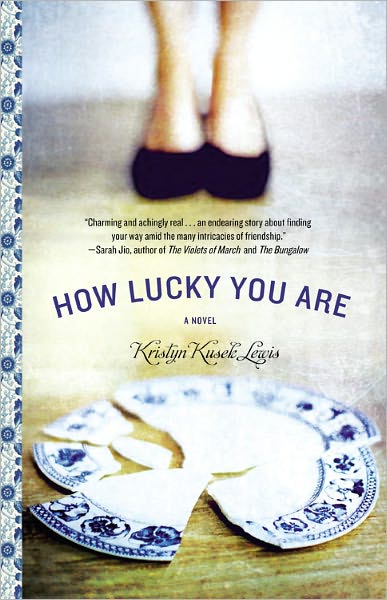 How Lucky You Are debut novelist Kristyn Kusek-Lewis has already impressed the likes of many esteemed women’s fiction authors. How Lucky You Are has been praised by Sarah Jio, Meg Mitchell Moore and Allie Larkin, to name just a few. Jio calls it “charming and achingly real.” Mitchell-Moore says “it’s a book for anyone who’s ever had a best friend or been a best friend,” and Larkin raves that it’s a “nuanced and heartfelt debut.”

If this group of talented authors is raving about Kusek-Lewis’ novel, it’s all the more reason to check it out for yourself.

About How Lucky You Are

How Lucky You Are is the story of Waverly, Kate and Amy, a tight-knit group of best friends held together by Waverly, their rock. But after many years of friendship, Waverly’s role as the group’s anchor is being tested. Her debt is mounting and the quaint bakery she runs is facing financial ruin. Meanwhile, her friends are facing serious struggles of their own.

Kate is fiercely independent and self-assured and married to a man who could be the next governor of Virginia, but she has a lot of unsettling questions she needs answered.

Amy is a stay-at-home mom who seems to have the perfect life, but she’s been keeping a horrific secret from the group.

Life’s pressures put this long-time friendship to the test and Waverly knows she has some huge, life-changing decisions to make. She’ll discover that there’s a fine line between loyalty and betrayal. And sometimes life is about taking risks in order to get the rewards you crave.

SheKnows book club: Join us!
Listen up: The Dog Stars by Peter Heller
RED HOT BOOK OF THE WEEK: And When She Was Good