Between animals running rampant around the office and a quirky know-it-all vet, Animal Practice is anticipated to deliver quite a few laughs! 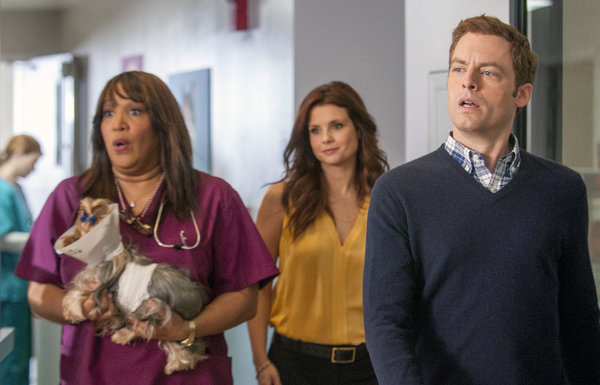 From the trailer alone, we can see that Animal Practice is going to be a hoot. Dr. George Cole (Justin Kirk) is a top veterinarian in New York City with a long list of famous animal patients at the Crane Animal Hospital. He has a gift for dealing with animals, a hard time getting along with humans, and an unorthodox style when it comes to running his office (sound like anyone? Paging Dr. House…).

Meet Dr. George Cole: His personality quirks make him a unique person, to say the least. He has an uncanny ability to turn cat suicide into a sexual innuendo, and — because of his know-it-all attitude — is a perfect example of a typical man, believing that everything you need to know about a woman can be learned from her dog. Come on, that couldn’t be more wrong! I mean, that would make me a hyper-aggressive and whiney woman, which is so not true (just don’t ask my boyfriend)!

Now, welcome to Crane Animal Hospital, where the patients are the ones who really run the show. Monkeys are employees, turtles race freely, and snakes are allowed to do as they please. Seriously, it seems like anything goes.

But George’s world and preference for chaos gets turned upside down when his ex-girlfriend Dorothy Crane (JoAnna Garcia Swisher) inherits the family business and becomes his new boss (now that would be the ultimate revenge!) Appalled by the structure — or lack thereof — of the hospital, Dorothy takes matters into her own hands, even if it means butting heads with George. But the arguments don’t last too long: it’s oh-so-obvious that these two are going to fall madly back in love. Typical? Yes. But I still like it.

It’s a better Dr. Dolittle, and a funnier version of House. The show has animals, doctors of every species [insert monkey noises here] and leading characters who are destined to fall in love… along with the guinea pig jockeys racing on turtles and chaos always about to ensue, it should be a pretty good time at Animal Practice. Oh, and, by the way — Kym Whitley from Sister, Sister plays a nurse, and the monkey from The Hangover is Dr. George’s right-hand man. They’re my favorite cast members, so far!

Don’t miss any of the fun before the season starts! Check out the trailer here…

There are so many more shows to see! Also check out…

Welcome to The Neighborhood! BTW, it’s filled with aliens