In case it isn’t enough to know that Snooki has had a baby, she has now said the birth was filmed and will be airing on her new show. But the new mom shows her soft side and talks about being a new mother and her newfound love of breastfeeding. 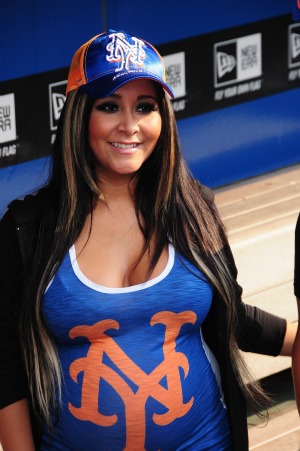 Snooki gave birth to her new baby boy Lorenzo just a few days ago, but that is no reason she might want some privacy in her life. The new mother has been tweeting up a storm about giving birth, her son and how much she is enjoying feeding him. On Sunday, she first tweeted about the birth of the baby.

“I am SO IN LOVE with my son Lorenzo Dominic! I had my little man last night, healthy at 6lbs! HE’S MY WORLD!” she said, according to the Daily Mail.

Snooki, whose real name is Nicole Polizzi, tweeted after a fan told her to be proud if she was nursing: “I love nursing my little man!” But just a few months ago, she told MTV she was a little apprehensive about the practice of feeding her son.

“I’m just scared,” she said. “My friend did and she said it was so painful… but I definitely want to pump because it’s the best nutrients for the baby.”

But then, in the same tone of who she plays on Jersey Shore (which, by the way, is not a character), she added in the interview with MTV that it’s OK, because “It’s kind of like you’re a cow and you’re just milking.”

So true Snooki. So true.

“All the pain and anxiety is so worth it. Xoxo,” she added.

If any fans are upset about being late to hear the news of the birth, not to worry. If you thought tweeting was as deep as she goes into her life, you would be wrong. According to RadarOnline, part of the birth will actually be shown on Snooki’s new show.

“There was a camera crew from 495 Productions, which produces Snooki & JWOWW, and they were in Snooki’s hospital room in the hours leading up to her birth,” a source told the website. “Viewers will see Snooki in labor, and the camera crew was kicked out as she was about to give birth. However, Snooki’s fiance, Jionni LaValle, was using a personal camcorder and he carried on filming.”

Besides wondering who would want to see Snooki giving birth, we wonder how much will actually be able to be aired. But if you are looking for it, Snooki & JWoww airs on Thursday nights.

5 mins ago
by Louisa Ballhaus