Prince Harry might be disappointed over his actions in Las Vegas. The likely reason? He might have been videotaped during his sinful vacation. 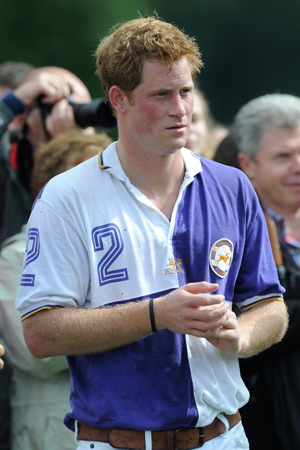 The nude photos of Prince Harry from his scandalous Las Vegas vacation didn’t really do much for us, mostly because all the parts we wanted to see were blurred out. Well, we might have a consolation prize — video purportedly showing Harry in the buff is being shopped, according to RadarOnline.

“There is video of Harry partying naked with women in the Las Vegas hotel room,” a source told the gossip website. “There have been some very quiet inquiries to see how much the video is worth.”

Apparently the footage wasn’t around when TMZ bought the photos last week — otherwise, you know Harvey Levin and company would’ve been all over it.

“The video has not been shopped around yet, its existence is being kept as discreet as possible,” the source added. “With all the attention the photos got, the people with the video know it could be worth a fortune.”

The 27-year-old Prince was reportedly “disappointed” in himself when the photos came out, likely because it put him in hot water with Queen Elizabeth and his military superiors. However, a source claimed there’s still a secret to be revealed about his trip to Sin City — and it’s big. Could it be the rumors that rampant drug use was happening at the now-infamous strip billiards party?

“Things got pretty crazy in Prince Harry’s suite that night. Everyone was drinking and drugs were also being used by some people,” a “witness” told Radar. “Some people were snorting cocaine… Some were already rolling on ‘shrooms [hallucinogenic mushrooms] when they arrived at the party, and some were just high on weed.”

Harry didn’t use drugs, though, according to the source. Well, that’s good — though we can’t imagine he’d be in trouble for other people’s choices. Guess we’ll just have to wait and see if the video ever sees the light of day.