Camille Grammer has definitely moved on from her marriage to Kelsey Grammer. Now she’s getting rid of the last thing they shared together — their Malibu mansion. 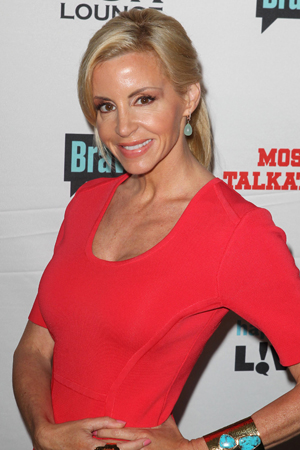 Former Real Housewives of Beverly Hills star Camille Grammer is moving on in a big way from Kelsey Grammer and their messy divorce —she’s selling the Malibu house they shared together, according to Trulia.

The sprawling mansion — listed for $17.9 million and featured on the hit Bravo reality show — features an astounding nine bedrooms, 12.5 bathrooms and “a grand main residence with gourmet kitchen designed by Wolfgang Puck, a large master suite with spectacular ocean views, a living room, great room, library, and Creston engineered home theater room with large projection screen,” according to the listing.

It’s apparent the former lovebirds still aren’t on speaking terms — Kelsey wouldn’t even say her name in an interview with Oprah.

As for Camille? She’s moved on to a hot, young Greek boyfriend, Dimitri.

He apparently gets along with her children she had with Kelsey too.

“He’s great with my kids and he’s good with me,” she added. “My son’s really taken a liking to him, and my daughter and him get along as well.”

“At some point, possibly yes,” she added to the website. “A year ago I would have said I definitely never, I will never enter into that kind of agreement. But now I’ve definitely changed my mind.”

We’d be weary of marriage too. Hopefully leaving the mansion behind will give her the fresh start she wants.