Police confirm they have evidence that Lohan stole several pieces of jewelry after a recent Beverly Hills house party. The bad news for Lilo: she’s already on probation for stealing that other necklace… 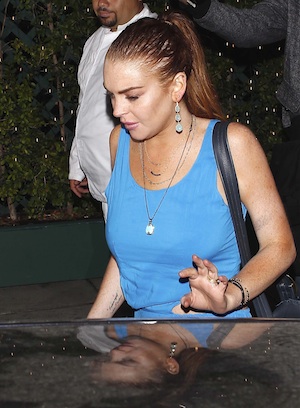 Last week Lindsay Lohan faced tough questions by the LAPD after $100k of jewelry was stolen from a Beverly Hills mansion she was partying at — now police say Lohan is the prime suspect in the case since detectives received independent evidence that corroborates Lohan’s role in the jewelry theft. TMZ originally reported the story back on Aug. 21, 2012 in which Lohan was questioned Monday afternoon when the home’s owner — Sam Magid — called police when he noticed several expensive watches were missing. Lohan left after police questioned her but said she wasn’t a suspect

TMZ spoke directly with law enforcement officials earlier this week and said detectives named Lohan as the prime suspect in the jewelry theft yesterday along with her assistant, Gavin Doyle, on Aug. 28, 2012. TMZ also reports both Lohan and Doyle refused interview requests by police through their attorneys.

A somewhat odd twist to the story is the owner of the house’s reaction to Lohan as LAPD’s target suspect in the heist. While Magid originally called police, TMZ says he refuses to cooperate with police if detectives pursue Lohan as the culprit. TMZ states Magid “recanted his story and now says nothing was stolen.” Unfortunately for Lindsay Lohan the LAPD refuses to close the case due to independent evidence and witnesses who say they saw Lohan steal the missing jewelry. Moreover, TMZ obtained copies of text messages in which Magid says to Lohan, “I officially told Detective Rodrigues you can’t take anything from me cause what’s mine is yours.” Magid continues and confesses his love for Lohan, saying “I will fight for you.”

The bad news for Lindsay Lohan is that she is still on probation for that other jewelry theft in which video footage showed Lohan stealing a $2,500 necklace from a LA jewelry store. Lohan could face jail time — again — if she is found guilty of the most recent Beverly Hills jewelry heist.

54 mins ago
by Sara Kitnick