While it may seem like a pointless endeavor, the band’s lawyer today filed an appeal for the three band members in jail. But the other two who have been identified reportedly fled Russia. 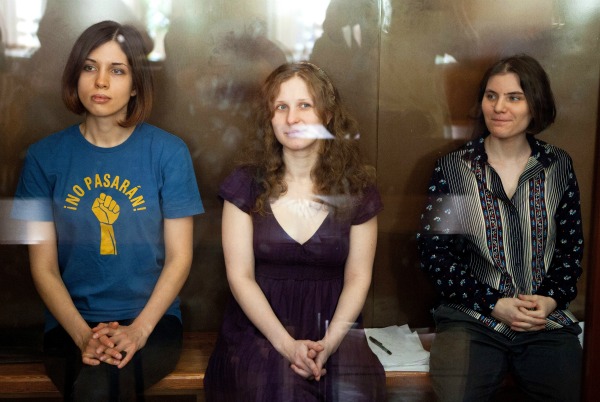 “The women were put on trial after performing a ‘punk prayer’ at Moscow’s Christ the Savior Cathedral in which they called on the Virgin Mary to deliver Russia from its leader, Vladimir Putin,” said the Associated Press.

Putin returned to the presidency in May and the band was protesting his return. Their lawyer, Violetta Volkova, said she submitted the appeal to the district court Monday. Five members had participated in the performance and the two members of the band who were not arrested and sentenced are said to have fled the country.

“The women wore their trademark balaclavas and only three were identified and arrested,” said the Associated Press. “After a controversial trial, they were sentenced August 17 to two years in prison.”

But police were still searching for the remaining members in an attempt to stop all other anti-Putin protests. The band’s Twitter page has been actively tweeting and said there may be many more members that have not been identified.

“The Pussy Riot Twitter account told followers that there are about 12 other members still on the run from Russian authorities,” said the Village Voice.

Twitter also was the first to report that two of their members had fled the country and are currently “recruiting foreign feminists to prepare new protest actions,” said the Associated Press.

The band’s Twitter page also has a lot of support from all countries, as evidenced by the different languages all their posts are in, and the numerous news articles they have posted from all over the world. Numerous celebrities have called for their release, including Paul McCartney, Madonna, Bjork and Peter Gabriel.

The prison sentences of the three jailed members are still under appeal, but the international support continues.