This is Oprah’s fourth year on the top of the list, so no one is too shocked. But the rest of the top five come as quite a surprise.

Related story Oprah Gave Fans a Glimpse Into Her Christmas With What Gifts She’s Already Got This Year — Ralph Lauren, SPANX, & More! 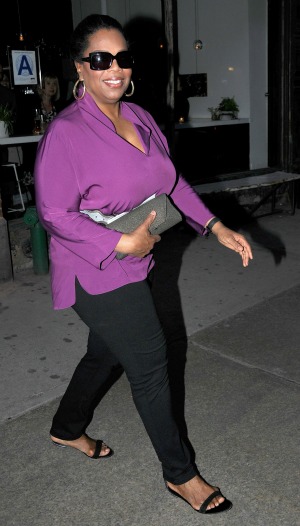 Forbes magazine releases their list of the highest paid celebrities each year and there is no surprise that Winfrey is once again on the top of the list. This is the fourth year in a row that she has claimed the title. Even though her last show aired in May 2011, she earned an estimated $165 million since then until May 2012.

“Through her Harpo productions, Winfrey still has her hand in Dr. Phil, Rachael Ray and The Dr. Oz Show,” said Forbes. “There’s her magazine, O, and her satellite radio station.”

Not to mention, she still has her own network, OWN, which includes her show Oprah’s Next Chapter.

But many might be surprised at who came in second place this year. The magazine lists Michael Bay as the second highest paid celebrity, with an estimated $160 million in earnings in the last year.

“Thanks to Transformers: Dark of the Moon, Bay had a spectacular year financially,” said Forbes. “The 3-D movie (the third in the Transformers series) was panned by the critics but audiences around the world flocked to see it, spending $1.1 billion on tickets.”

For the list, movie-making seems to be where the money is, because another movie maker came in third place this year, following closely behind Bay. Steven Spielberg made an estimated $130 million last year, with successes in movies like The Adventures of Tintin and War Horse. Both movies were nominated for Oscars.

Fourth place is filled by Jerry Bruckheimer, whose Pirates of the Caribbean: On Stranger Tides was one of the highest grossing movies of 2011. He earned an estimated $115 million in the year. He will also release The Lone Ranger later this year.

The fifth space on the list was also somewhat of a shocker. Dr. Dre made an estimated $115 million from May 2011 to May 2012 also. The rapper’s income for the year may have been a one time deal though.

“In August, handset maker HTC paid $300 million for a 51% stake in Beats by Dr. Dre, the headphone company he co-founded with Interscope chief Jimmy Iovine in 2006,” said Forbes.