Mike & Molly is a unique sitcom in many respects. The two main characters met at Overeaters Anonymous and soon became a couple. Mike, an overweight cop, and Molly, a chubby elementary school teacher, aren’t who we’ve come to expect in leading roles in a romantic comedy on television. However, the result is a sitcom with many hilarious moments.

With all the shows out there starring “pretty” people (we don’t see many Roseannes these days), Mike & Molly focuses on two characters that are real. Due to their extra weight, Mike and Molly spend a lot of their time dealing with demeaning comments from everyone — family members, friends, acquaintances and even Mike’s partner on the police force. 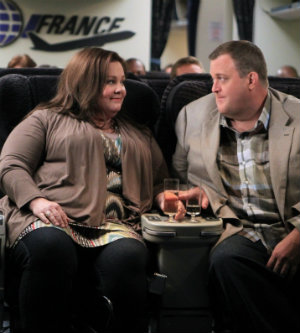 The final few episodes of Season 2 of Mike & Molly revolved around their wedding planning. The bachelor and bachelorette parties were full of hilarity, while the rehearsal didn’t quite go down as planned. In the final episode, the twosome were married.

Melissa McCarthy, who plays Molly, does an outstanding job in her role. In both 2011 and 2012, she was nominated for an Emmy Award for Outstanding Lead Actress in a Comedy Series. In 2011, she won the award.

In Season 3, how will Mike and Molly deal with married life? Will things get easier or will they still face the same obstacles that plagued them during their courtship? Tune in beginning Monday, Sept. 24 at 9:30/8:30c and find out.

The show is funny… very funny. Fat or skinny, tall or short, who cares what they look like? Back in 2010, a blog commentary was written about the series by Maura Kelly on the Marie Claire website. The article, titled “Should Fatties Get a Room?” sparked great debate and discussion around the internet about what people really want to see on television. Apparently some people would rather see skinny than see funny. If you’re not one of those people, tune in to see what’s next on Mike & Molly.