ABC’s comedy-drama Castle revolves around the lives of Richard Castle, a mystery writer, and Kate Beckett, an NYPD detective. Of course, when the two first met, Kate wasn’t thrilled about Rick, but the chemistry has grown and now, heading into Season 5, we can’t wait to see what’s next for the duo. 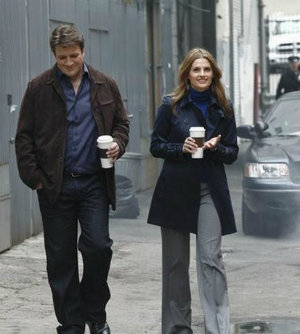 As Castle has evolved, the romantic chemistry between Rick (Nathan Fillion) and Kate (Stana Katic) has intensified. The twosome spend their days and nights solving usual crimes in New York City together. However, the crime they both really want to solve is the murder of Kate’s mother.

The fourth season ended with a ton of action. After Rick and Kate grew closer than ever, they suddenly suffered a rift in their professional relationship. Rick tried to stop Kate from investigating a dangerous crime — but she refused. Kate then got in trouble with her bosses and ended up resigning from her job. At that point, she went to Rick’s house, and the two shared a kiss — and more.

In Season 5, we’ll see if Kate decides to go back to the NYPD or if she’s off the force for good. Will the duo now go out and try to solve crimes on their own?

Castle is quietly becoming a popular show. In Season 4, nearly 12 million people tuned in per episode — easily the highest number of any of the four seasons. ABC hopes that Season 5 will continue the upward trend. The fifth season premieres on Monday, Sept. 24 at 10/9c.

You have to tune in just to see what’s going to happen to Rick and Kate now that they’ve gotten together. We were hoping there wasn’t going to be a time-jump, and thankfully there’s not.

“We’re picking up the morning after” Rick and Kate finally fell into each other’s arms (and his bed), series creator Andrew Marlowe told TVLine.com, “and we get to see what that looks like. We see how they both reacted to her coming over and the decisions that she’s made and the situation that they now find themselves in. But as with any great moment you have in a relationship, it can’t last, because real life intrudes.”

Castle has been a big hit with the fans. In fact, it won People’s Choice Awards for Favorite TV Drama Actor (Fillion) and Favorite TV Crime Drama. And now with the changes at the end of the fourth season, Season 5 could very well have the best episodes yet.

Get a sneak peek at Season 5 of Castle