One of the most popular comedies on television, Modern Family is back for its fourth season. Ed O’Neill of Married with Children fame is the patriarch of this family, which features a large ensemble cast that includes Sofia Vergara, Julie Bowen and Jesse Tyler Ferguson, among others. 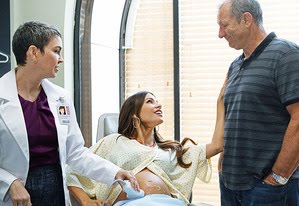 The third season of Modern Family met with much success, receiving 14 Emmy Award nominations — the most for a comedy. Season 4 premieres on Wednesday, Sept. 26 at 9/8c.

Shot in mockumentary style, in which the characters frequently talk to the camera, Modern Family is about three intertwined families. The families are related through Jay Prichett (Ed O’Neill) and his children, Claire (Julie Bowen) and Mitchell (Jesse Tyler Ferguson). Jay is married to a much younger woman, Gloria (Sofia Vergara), who is also raising her son, Manny Delgado. Claire is a stay-at-home mom married to a real estate agent, “Cool Dad” Phil (Ty Burrell). They have three kids of their own. Mitchell is a lawyer, and he and his partner Cam (Eric Stonestreet) have adopted a baby from Vietnam.

In Season 3, Cam and Mitchell spent considerable time trying to adopt a second child, but the adoption fell through. In a twist, it ended up that Gloria is pregnant. The show features some amazing guest stars, such as Shelley Long, who plays DeDe Pritchett — Jay’s ex-wife and Claire and Mitchell’s biological mom. Nathan Lane has also appeared a couple of times as Cam and Mitchell’s friend Pepper Saltzman. In the fourth season, Wendi McLendon-Covey and Michaela Watkins make guest appearances as a lesbian couple whose son gets into a fight with Lily at school.

Every character on Modern Family is fantastic, starting with Ed O’Neill (aka Al Bundy) on down. The new season is sure to be full of surprises and hilarity, with Gloria’s pregnancy being a touchy subject for everyone.

Get hooked on Modern Family