Set in Atlantic City in the Prohibition era, Boardwalk Empire stars Steve Buscemi as Enoch “Nucky” Thompson (a character based on real-life Atlantic City political boss Enoch L. Johnson). The HBO series has received worldwide critical acclaim, having been nominated for 30 Emmy Awards and having won eight over its first two seasons. The show is set to embark on its third season this fall, and we can’t wait to see what’s next. 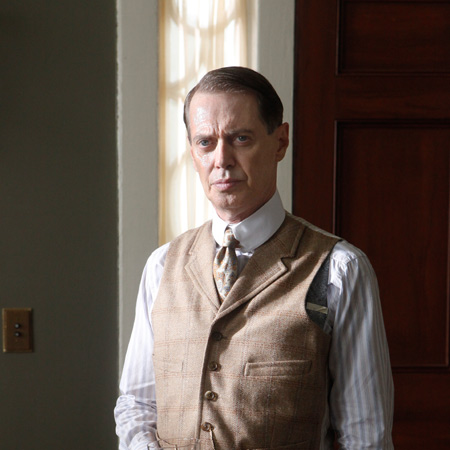 The Emmy- and Golden Globe-winning drama series Boardwalk Empire kicks off its 12-episode third season on Sunday, Sept. 16, at 9/8c. Nucky Thompson (Steve Buscemi) is faced with a host of challenges this season, including mending old relationships and fending off some new competition.

In Season 2, Nucky Thompson managed to beat election-rigging charges and stay on top of the bootlegging game. He also married Margaret Schroeder (Kelly Macdonald) — a young Irish widow and mother. In the spectacular season finale, Nucky became a “full gangster” when he killed his former protege, Jimmy Darmody (Michael Pitt).

As Season 3 begins, the show jumps ahead to New Year’s Eve, 1922. Alcohol is scarce, gangster violence is heating up and Nucky’s marriage to Margaret is already on the rocks. Nucky also has a new obstacle in his way as he looks to rebuild his empire — a touchy New York gangster, Gyp Rosetti (Bobby Cannavale), who is determined to siphon off Nucky’s business.

Why you should watch?

This captivating, epic series is one of the best shows on television right now. The writing is phenomenal, and Buscemi never disappoints. If you thought you saw the last of federal agent Nelson Van Alden (Michael Shannon) last season, you’ll be happy to know he’s back for Season 3 — but not in Atlantic City.