On Sunday’s Keeping Up With the Kardashians, Rob Kardashian basically told his sister what everyone thinks about her. Mainly, she’s self-absorbed. 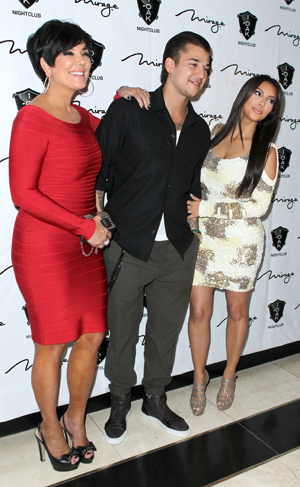 Kim Kardashian: Selfish? We never would have thought!

Just kidding: We know Kim is a big fan of herself, judging from the dozens of bikini shots she posts on Twitter on a weekly basis. However, we’re not the only ones who see her selfish ways: Her family gets a front row seat to that — and mom Kris Jenner supports it.

“Right now, there’s some issues between us,” Rob Kardashian said during Sunday’s Keeping Up With the Kardashians. He seems to be the one Kardashian/Jenner kid who is most upset about Kim’s status as the most important member of the family. He urged the family to seek counseling, but Kim didn’t want to go.

“Therapy’s not for me. I’m a very logical person so if I’m acting crazy, I know why,” Kim lamented. “I don’t really want to talk to a stranger about my family problems.”

But Rob doesn’t see it that way.

So, Kim Kardashian walks into a swingers party… >>

“Kim is the most selfish person and doesn’t want to ever include me,” he said, adding that she’s trying to stall his career. Sister Khloe Kardashian was on his side, adding that she doesn’t understand why their mother favors Kim.

“I don’t know why my mom finds it a shock to think she favors Kim,” Khloe said. “We’re not just my mom’s clients, we’re her children!”

Ah, the dynamics of a family hungry for fame and money above all else. The explosive episode will continue next week — and it sounds like there’s more drama to come.

“Sometimes a big sis gets frustrated. Wait til next week,” she tweeted Sunday night after the show.