Set in a Brooklyn diner, a mismatched duo — a hard-working brunette and a blonde trust-fund princess — come together to become friends, roommates and business partners. 2 Broke Girls is a solid sitcom that is witty, endearing and a lot of fun. 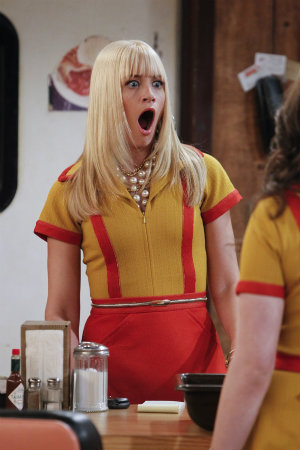 While other shows have all the drama, suspense and doses of reality you could ask for, 2 Broke Girls is just a fun, good-old-fashioned sitcom that offers plenty of laughs.

Created by Michael Patrick King of Sex and the City fame and Whitney Cummings, 2 Broke Girls debuted on CBS during the 2011-12 season. The show stars Max (Kat Dennings) and Caroline (Beth Behrs) as two sassy, smart waitresses with a common goal — to start a cupcake business.

Max comes from a working-class family, while Caroline was born to wealthy parents, but is now poor, too — thanks to her dad getting caught in a Madoff-like Ponzi scheme.

The unlikely friends work at the Williamsburg Diner, along with a mishmash of other characters including the cashier Earl (SNL‘s Garrett Morris), a former jazz musician, and Oleg (Jonathan Kite), the Ukrainian cook who is always trying to hook up with the girls.

And then there’s a horse — yes, a horse — named Chestnut who plays an important role on the show. Each episode of 2 Broke Girls ends with a running tally of how much the twosome have earned toward their $250,000 goal to open the business. By the end of the first season, Max and Caroline had only tallied $927.

Though it’s a little bit raunchy and there are plenty of stereotypes, this show is witty and fun. The “girls” have great chemistry and play off each other very well. 2 Broke Girls won the award for Favorite New TV Comedy at the 38th People’s Choice Awards. The second season of 2 Broke Girls premieres on Monday, Sept. 24 at 9/8c.

In the one-hour inaugural season finale, Max and Caroline got Martha Stewart to taste their latest creation — the Beer Batter Maple Bacon Spring Break Cupcake. Will Martha be back in the second season to back their business? You’ll have to watch to find out.

Get a glimpse at season 2 of 2 Broke Girls