Parks and Recreation had a bumpy beginning, but has gained traction as one of the best comedies on television. The NBC show, criticized early on for being too much like The Office, has since found its own niche. As it heads into its fifth season, it has a large online following and a loyal fan base. 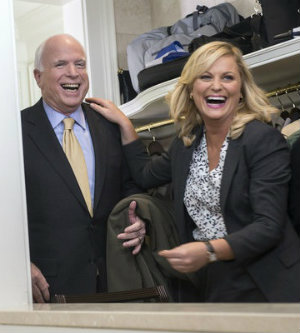 In Parks and Rec, Leslie Knope (Amy Poehler) works for the parks department for a city in the state of Indiana. Despite the politics involved with her position, Leslie reminds upbeat and optimistic at each turn. From her government-hating boss Ron Swanson (Nick Offerman) to her hilariously sarcastic subordinate Tom Haverford (Aziz Ansari), Parks and Rec is filled with great characters that will have you crying with laughter.

The last we saw of Leslie in Season 4, she was winning the race for city council. Since Leslie has the goal of becoming the President of the United States, she saw this as just one small step in a much larger quest. However, those around her are surprised she’s made it even this far.

In its fifth season, Parks and Rec will head to Washington D.C. In our nation’s capital, Leslie will meet up with the man that ran her victorious campaign. The fifth season will also feature a new love interest (Lucy Lawless) for Ron.

Parks and Rec is the rare show that just gets funnier and funnier. Season 5 may very well be the year that this show becomes a mainstream hit. Watch the premiere on Thursday, Sept. 20 at 9:30/8:30c.