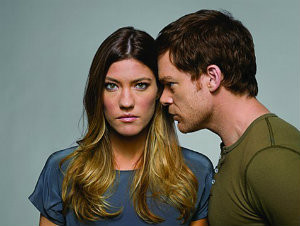 If you want to know why Dexter is so loved, watch a few back episodes and you’ll be hooked. The plot is fantastic: Dexter Morgan (Hall) is a blood spatter analyst for the police department in Miami. On the side, he’s a serial killer. But he doesn’t go after just anybody — Dexter makes it his mission to kill only people who are killers themselves.

A guy who works for the police moonlights as a serial killer? Yes, this is what makes the show so magnificent. Unfortunately for fans of Dexter, all good things do come to an end. On Sunday, Sept. 30 at 9/8c, the seventh season of Dexter will begin, and next year’s eighth season will be the final one.

Season 6 ended with arguably the most dramatic scene in the show’s history. Debra Morgan (Jennifer Carpenter), Dexter’s stepsister, saw him kill someone for the first time — so his secret is now out. To complicate matters further, Deb was starting to fall in love with Dexter.

In Season 7, a lot of questions will need to be answered. What will Deb do now that she knows Dexter is a killer? Will Deb turn him in? Does she still love him? This season is going to be riveting from the opening credits of the first episode.

Dexter may very well be the best drama on television. Even if you’ve never watched it before, now is a great time to jump in and see how this classic show culminates over the final two seasons.

Get a glimpse of what’s next for Dexter!