The Showtime series Homeland, which falls somewhere between a serial drama and a psychological thriller, is heading into Season 2 after an amazingly successful first season. Season 1 saw huge ratings along with many critics calling it one of the best — if not the absolute best — series of the year. 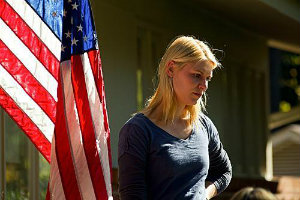 In Homeland, Carrie Mathison (Claire Danes) is a CIA officer who got in trouble for leading an operation in the Middle East without proper authorization.

As part of her punishment, she’s sent to Virginia and is put in charge of counterterrorism. Soon, Carrie believes that a man who is being called a war hero is actually a terrorist in disguise. Due to his fame, she doesn’t feel comfortable telling her boss of her suspicion. Instead, she takes it upon herself to investigate the so-called hero.

At the end of Season 1, Carrie remembers an important clue — but shock therapy she’s been given to overcome her bipolar disorder threatens to erase that clue from her mind. The supposed war hero, Nicholas Brody (Damian Lewis), is still not suspected of any wrongdoing by anyone else but Carrie.

As we head into the second season, Carrie will try to get back into the intelligence community in an attempt to save the country from a possible disaster. Nicholas, on the other hand, will attempt to climb the ladders of government to gain as much power as possible — and apparently use that power for evil purposes.

Homeland co-executive producer Alex Gansa told HuffPost of Season 2: “She will have been in the psych ward for awhile. She will have been in the care of a psychiatrist for six months. She will have undergone a series of these ECT therapies. (The treatment we saw in the Season 1 finale) is not just a one-off… When we find her as the second season picks up, she will be in a place where she is centered and quiet and together in a way that we haven’t seen her before.”

If the first season of Homeland is any indication, this television show has a chance to become one of the best series of this generation. Danes and Lewis are excellent and the action is sure to pick up even more in Season 2. Check out the premiere of the second season on Sunday, Sept. 30 at 10/9c.

Check out the trailer for season 2 of Homeland