Not long ago, Community was on the brink of being canceled, but dedicated fans of the series rallied to save it. Now with a small but cultlike following, the show may be on life support — but it’s back on NBC for a fourth season this fall. 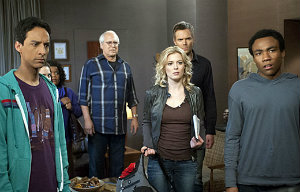 Perhaps part of the reason Community hasn’t been a mainstream hit is the show’s unique sense of humor. While it’s not for everyone, obviously some out there find this comedy extremely funny.

Community focuses on a community college in a small town in Colorado. The students include Jeff Winger (Joel McHale), a former lawyer who becomes the leader of this group; Britta Perry (Gillian Jacobs), a recovering anarchist; Abed Nadir (Danny Pudi), a film student; and Shirley Bennett (Yvette Nicole Brown), a religious nut who is going to community college to start a business selling brownies.

As the show heads into Season 4, no one knows quite what to expect. Dan Harmon, the man in charge for the first three seasons, was kicked to the curb. NBC and Sony decided to bring in new blood. Since this series was so distinctive to begin with and it was all spearheaded by Harmon, Community might go in a number of different directions.

Some insiders believe that Community will try to tone down some of its unusual qualities in order to attract a more mainstream audience. If that happens, Community may lose its cult status. Then again, the core cast is returning for the fourth season, so perhaps the actors will be able to keep the hard-core fans entertained. If you are already a fan of Community, you shouldn’t give up on the show just yet. If you’ve never watched it, now is a good time to take the plunge since a lot of changes are in store. To catch the Season 4 premiere, tune in to NBC on Friday, Oct. 19 at 8:30/7:30c.