After two immensely successful seasons, The Walking Dead will soon be back for a third. After debuting in 2010, the show has been a momentous hit for AMC. In fact, the second season’s finale was watched by more people than any other drama TV show in basic cable history. 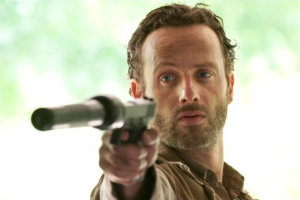 The series began with Rick Grimes (Andrew Lincoln) waking up from a coma to find the planet overtaken by zombielike creatures. Grimes’ sets out to look for any surviving relatives — only to be stunned by what he finds.

The Walking Dead has been nominated for numerous awards and, based on its unprecedented viewership, it’s safe to say the series already has quite a large following.

Season 2 ended with a whole lot of drama. Grimes was forced to kill Shane Walsh (Jon Bernthal), his best friend. The remaining survivors had no choice but to battle for their lives — only to face obstacles at every turn. With the survivors seemingly at the end of their rope, they began to question Grimes’ status as the leader of the group.

What will happen next in Season 3 is anybody’s guess, but the final scene of the second season showed an imposing prison. Will that prison play a role in their survival or will it be another obstacle? Tune it to find out.

The Walking Dead finale: What the heck just happened? >>

The Walking Dead is just gearing up. It’s been great so far, but it promises to get better and better. Season 3 will be split into two parts of eight episodes each, with the premiere taking place on Sunday, Oct. 14 at 9/8c.

Get excited about season three of The Walking Dead