Boss, set in Chicago, revolves around the city’s mayor, Tom Kane. Secretly battling a neurological disorder that is progressively diminishing his ability to function, Kane struggles to hold it all together. 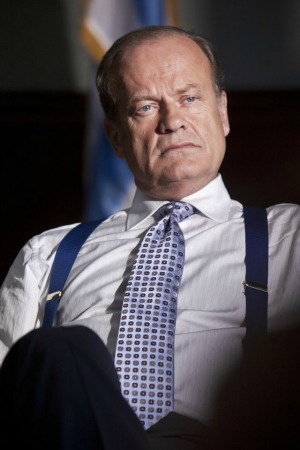 After a critically acclaimed first season, the second season of Boss is off to an exciting start. The Starz political drama premiered its second season on Friday, Aug. 17 at 9/8c.

Kane (Kelsey Grammer) isn’t just challenged by his condition. His strength is further tested by a failing marriage and subordinates who are only looking out for themselves.

While Kane is able to conceal his degenerative condition for a while, those close to him slowly begin to realize something is amiss. However, the mayor of Chicago is determined to stay in command.

In Season 2, Kane is under heavy attack from just about everyone. Now that he’s finally showing some weakness, there’s no shortage of politically hungry newcomers looking to further their careers at his expense. Soon, the mayor is even dealing with a close brush with death.

If you missed the premiere, you can go to the Starz website and watch it now to get caught up. After watching the episode, don’t be surprised if you’re hooked and check in weekly to see Grammer at his best.

The first season of Boss was nominated for a Golden Globe in the Best Drama Series category. Grammer was nominated and won a Golden Globe for Best Actor in a Television Series Drama. With a shortage of riveting political dramas in recent years, Boss is able to shine in this difficult-to-master genre. Kelsey Grammer is wonderful, and the twists and turns will keep you on the edge of your seat.

See what the cast has to say about the upcoming season