The Expendables 2 maintains its status as the number one movie in America this weekend with a second week at number one, while a political documentary about Obama’s childhood also makes it into the top 10. 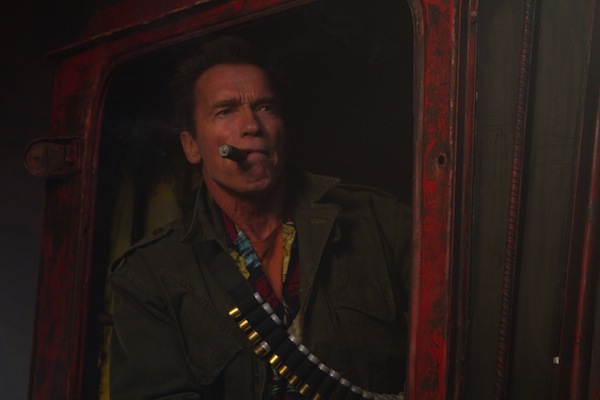 No. 1 — The action flick staring Arnold Schwarzenegger, Sylvester Stallone, Liam Hemsworth, Chuck Norris and anyone who has ever taken a martial arts class in Hollywood, The Expendables 2, held onto its number one status at the box office this weekend with an estimated $13.5 million in returns, according to Deadline Hollywood.

No. 2 –The continuation of the saga of a CIA program gone awry, The Bourne Legacy, nabbed the number two spot with $9.2 million this weekend. Although helmed by Jeremy Renner, the film is the fourth in a series of action-thrillers which previously starred Matt Damon.

Movie review: The Bourne Legacy —the spy who I wished loved me >>

No. 3 — ParaNorman, the adorably creepy stop-motion 3D animation about a boy who has the power to see ghosts comes in third this week with $8.5 million in box office returns. Seeing dead cartoons is more fun than seeing dead people!

No. 4 — The comedy farce staring Will Ferrell and Zach Galifianakis, The Campaign, came in fourth with $7.4 million in returns. The spoof on elections has these two loveable idiots facing off to be the best candidate for public office. Wackiness ensues!

No. 5 — Holding strong for a fabulous summer run in the top ten, The Dark Knight Rises ranks fifth with $7.1 million this weekend. The final chapter in the Christian Bale Batman series stars Anne Hathaway and Joseph Gordon-Levitt.

No. 6 — The sweet, Jennifer Garner family film about a couple who has a tough time having kids, The Odd Life of Timothy Green, stole hearts to the tune of $7.1 million this weekend bringing it in at number six.

No. 7 — Premium Rush, a new release out this week about a bike messenger in New York City, disappointed with only $6.3 million in box office returns. Joseph Gordon-Levitt plays a rider with a secret package in this fast-paced action film.

No. 8 — The new anti-Obama documentary, 2016 Obama’s America, impressed critics with ticket sales this weekend estimating at $6.2 million in box office returns. The film was helmed by conservative author Dinesh D’Souza and focuses on the president’s childhood, among other areas of his private life.