Kim Kardashian plays dress-up with Hype Williams, and the result is something that kind of looks like Diana Ross. 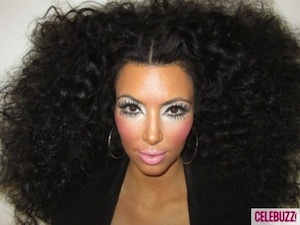 Kim Kardashian never seems to miss out on a chance to go ultra glamorous. Kiki recently did a photo shoot with Hype Williams — see photo to right — and she explained on her website the heavy makeup and afro were part of the intended look. “Clyde Haygood and Joyce Bonelli glammed me up and we went for a fun, crazy look, channeling Diana Ross. Definitely a new look for me. Xo.”

So, Kim Kardashian walks into a swingers party >>

The photo shoot contains seven photos and each shows Kim decked out in amazing hair extensions, layers of false eyelashes and retro makeup. Kardashian has worked with Hype Williams on previous projects like her highly criticized “Jam (Turn It Up)” music video which Williams directed. Kim Kardashian later stated the highly sexualized music video — paired with monotone auto-tuning — was not meant to be released to the public. Coincidentally, the music video was released almost exactly one year ago today.

Kim Kardashian seems to pull off a fairly good impression of the 1970s icon Diana Ross. As a treat for you we have pulled the one-minute clip of Kim Kardashian’s infamous music video for “Jam (Turn It Up)” courtesy of Perez Hilton.

What do you think of Kim Kardashian and her impression of Diana Ross? Does Kim do the icon justice or is it just a Halloween costume gone wrong?