The Empire State Building has been featured in some of the most iconic films, from King Kong to Sleepless in Seattle. But Friday morning it was the site of real-life terror, as a disgruntled fashion designer engaged in a deadly shootout with cops. While garnering more media coverage, that shooting paled in comparison to the 13 people gunned down in a half-hour 800 miles away in Chicago. 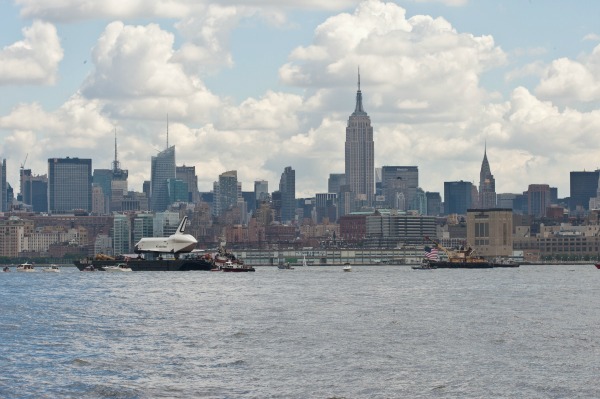 During a press conference Friday morning, New York City Mayor Michael Bloomberg said the shootout that claimed two lives and injured at least nine others could have been “much, much worse,” given that the shooting happened a little after 9 a.m. outside the Empire State Building on bustling Fifth Avenue.

In the hours following the shooting, several witnesses noted that anti-terrorism officers who policed the area were quick to respond and, during the press conference, a construction worker was referenced as a “hero” by members of the press.

That worker apparently spotted the shooter believed to have started it all, Jeffrey Johnson, and proceeded to follow him and report the 53-year-old to police.

During the press conference, it was noted that Johnson allegedly shot a former co-worker on the Fifth Avenue side of the iconic building.

The network affiliate said both Ercolino and Johnson had filed police reports against each other in the past year.

Most puzzling, Bloomberg noted during the press conference that Johnson had been fired from his job as a designer at Hazan Import Corp. a year ago during a round of layoffs.

According to small business directory Manta, the 37-year-old business specializes in wholesale handbags.

Johnson was later shot and killed by police officers, during a shoot-out that Bloomberg also noted resulted in some passersby being hit in the crossfire.

Officials noted that all those wounded are expected to survive.

Ice-T to Rush Limbaugh: I’m not your pro-gun poster boy >>

While “New York shooting” and “Empire State Building” may have trended Friday morning, some 800 miles west in Chicago, 13 people were shot in the south and southwest portions of the city in a half-hour time period Thursday night. In all, 19 people were hurt during shootings that spilled over into the early Friday hours.

But, at least for a time Friday morning, the New York shooting trumped the latest rash of violence in the city — even in the home paper, the Chicago Tribune, which featured a headline about the Empire State gunfight above a headline about the outrageous gun crimes in its own backyard.

54 mins ago
by Kay Snowden