What becomes of the brokenhearted? That’s a question Family Guy tries to answer in its “Valentine’s Day in Quahog” episode. Next year, Jessica Biel will appear on the animated comedy to discuss the game of love. 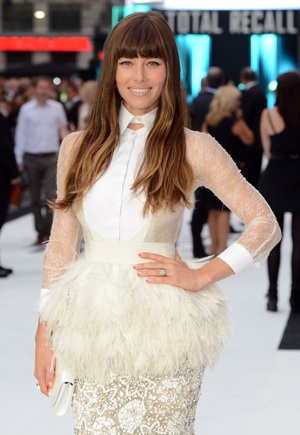 Family Guy has a bevy of beauties lined up for its Valentine’s Day episode. But instead of celebrating love, they’ll highlight failure and heartbreak.

Jessica Biel (Total Recall), is one of many actresses set to appear as Brian’s (Seth MacFarlane) former flames.

According to Entertainment Weekly, Family Guy is pulling out all the stops (and hotties) for its holiday theme. After Brian spends Valentine’s Day alone, Stewie tries remedy his relationship problems.

How does Jessica Biel keep her totally hot bod? >>

“Stewie gathers scores of Brian’s former girlfriends to get to the bottom of why he’s unsuccessful in love,” says executive producer Mark Hentemann. “The women are not reluctant to point out Brian’s flaws, and have a great time doing so.”

Who are these women? Well, aside from Biel, who’ll play Brooke, there’s Drew Barrymore (as Jillian), Nicole Sullivan (Tina), Cheryl Tiegs (as herself), Jessica Stroup (Denise), Julie Hagerty (Carol), Kat Foster (Carolyn) and Nana Visitor (Rita). How did Brian get so lucky? No one knows!

Justin Bieber to guest star on The Simpsons >>

Something must be in the air, because The Simpsons 24th season premiere will tackle a similar storyline. In their case, Bart’s romantic past comes back to haunt him in the forms of Natalie Portman, Anne Hathaway, Zooey Deschanel, Sarah Michelle Gellar, and Sarah Silverman.

Family Guy and The Simpsons premiere Sept. 30, and the Valentine’s Day episode is scheduled for early 2013.

What do you think of this lineup of ladies?