Two months after Katie Holmes initially filed for divorce from Tom Cruise, and within days of the divorce being finalized this week, it’s reported that little Suri will get a “paltry” $400K a year. Mama Katie got as she wished, and will net nothing. 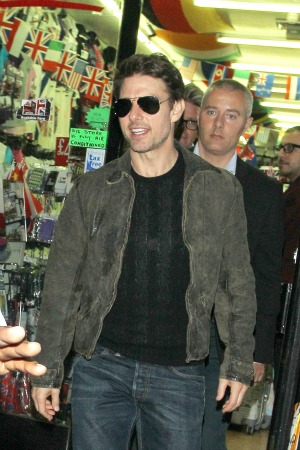 To most of us mere mortals, roughly $33,000 a month in child support is worthy of a Publisher’s Clearing House-style freak-out. But to A-listers (and Scientology Operating Thetan 7s) like Tom Cruise, that sum netted from this week’s divorce settlement with Katie Holmes is a mere drop in the bucket.

Let’s face it, it’s probably not enough to pay for Suri’s shoes and awesome tree houses.

As TMZ puts it, the Mission Impossible star pulled off the seemingly impossible again by “getting out cheap” from one of Hollywood’s most high-profile divorces.

While Suri might be able to keep her little feet in Louboutins a little while longer, Katie reportedly isn’t getting a dime — and that appears to be in keeping with Katie’s wishes, as the actress allegedly said all she wanted was her pint-sized princess and not the money.

More importantly, Katie’s big “zero” is consistent with their prenup, which TMZ reports essentially shuts her out of Tom’s fortune.

The gossip site also notes that, while Tom will end up paying nearly $5 million over the next 12 years, Katie could have gotten more out of him to rear Suri — had the couple not settled so quickly.

As part of the settlement, it’s also up to Tom to pay for Suri’s health care, insurance and school-related expenses.