Even with some strong films coming out this weekend, experts expect the action film starring some Hollywood legends will again be the number one movie in America. 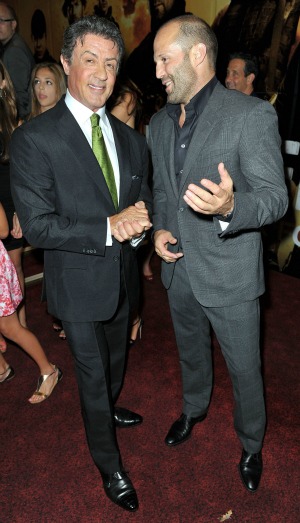 There are quite a few new movies opening this weekend, but industry analysts aren’t expecting any of them to knock The Expendables 2 off the top spot.

“There are no new superheroes, sequels or kids films,” said Todd Cunningham with Reuters. “The weekend’s two widest openers — Sony’s Premium Rush and Hit and Run from Open Road — are not expected to mount a challenge for the top spot. There’s even a chance that a documentary, 2016 Obama’s America, will crack the top ten.”

Cunningham said that The Bourne Legacy and ParaNorman, both films that are already open, are expected to reach around $10 million each.

Hit and Run, starring real-life couple Dax Shephard and Kristen Bell, opened Wednesday and has already made $625,000. The number may not seem like much, but Cunningham expects the film to gross $8 million this weekend. Not bad when you consider that the film cost just $2 million to make.

Dax Shephard, one of the stars of the movie, wrote the screenplay.

Another question mark is Premium Rush.

“Premium Rush, which Sony is rolling out on 2,100 screens, is an intriguing offering,” said Cunningham. “The plot couldn’t be much simpler: A bicycle messenger, played by Joseph Gordon-Levitt, is chased around New York City by a dirty cop who wants an envelope that the messenger is carrying.”

Premium Rush was directed by David Koepp, the writer of Jurassic Park, Mission: Impossible and Spider-man. He is also reportedly writing the new Jack Ryan movie.

Of all the new movies though, the blockbuster Expendables 2 is still set to come out on top. Industry analysts are expecting $14 million at the box office for the sequel over the weekend, said Cunningham. The film stars Hollywood legends Jean Claude Van-Damme, Sylvester Stallone, Arnold Schwarzenegger, Chuck Norris, Jason Statham and Jet Li.