Could Candy Store get a double dose of star power? Brad Pitt and Denzel Washington are staking their claim on Stephen Gaghan’s latest film. But they’re not the only ones with their eye on the prize. 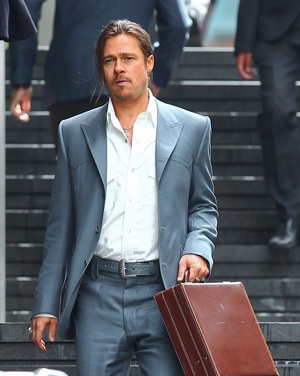 Don’t let the name fool you, Candy Store isn’t all fun and games. It’s the title of an upcoming crime thriller from writer-director Stephen Gaghan. The film has caught the eye of Hollywood heavyweights Brad Pitt and Denzel Washington.

According to The Hollywood Reporter, both actors are in early talks to co-star. Candy Store is a “two-hander” that will give them some meaty material.

“A highly-trained, deep-cover operative starts his life over in Brooklyn as a beat cop only to discover the global organization he was dedicated to fighting is also operating in his new backyard.”

Aside from Pitt and Washington, Jamie Foxx is also interested in filling one of the main roles. That’s two Oscar-winners and one nominee — if that’s not stiff competition, we don’t know what is.

If all the pieces fall in place, this will be Gaghan’s largest directing gig since 2005’s Syriana. He co-wrote and directed that film, which earned George Clooney an Academy Award for best supporting actor.

Can Brad Pitt save the zombie movie that’s a real-life horror? >>

While they’re working out a deal, Pitt and Washington have other films on the horizon. Pitt plays a stylish hit man in Killing Them Softly (Oct. 19) and a zombie survivor in World War Z (June 21).

On Nov. 2 Washington returns to the big screen as a troubled pilot in Flight. And next year, he’ll bump heads with Mark Wahlberg in the crime drama 2 Guns (Aug. 16).

Do you want to see Pitt and Washington team up?