ABC has added Last Resort to its roster of new fall TV shows, and it looks like a mix between The A Team, Temptation Island and The Hunger Games… now we’re just trying to figure out if that’s good or bad. 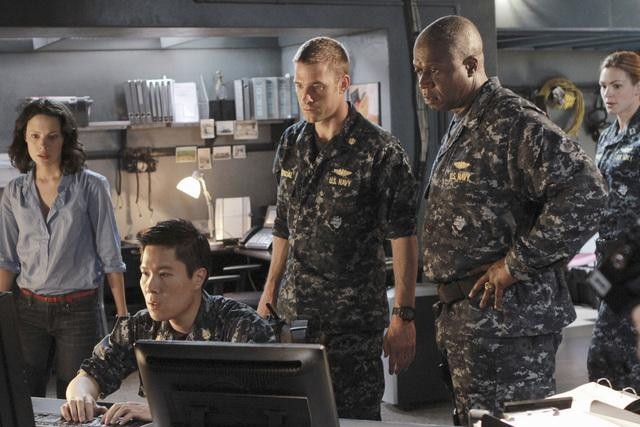 When I first read the synopsis for Last Resort, this is what I thought… “It’s dark. There’s a solemn attitude in the submarine. Music begins to play and then a man with a deep voice comes out of nowhere and says, ‘500 feet beneath the oceans surface, the U.S. ballistic missile submarine Colorado receives their orders… they’re told to fire nuclear weapons at Pakistan.'” I have to say, after watching the trailer, I was pretty darn close!

Created by Shawn Ryan, Last Resort tells the story of a renegade crew of the U.S. Navy, who is stationed on the fictional USS Colorado. Upon receiving orders to launch nuclear missiles towards Pakistan, the Commanding Officer Captain Marcus Chaplin (Andre Braugher) refuses to oblige without an explanation or confirmation. The White House relieves him of his duties, only to have his replacement Sam Kendal (Scott Speedman) question the same command.

Without warning, the vessel is fired upon and the crew of USS Colorado is left for dead… but, of course, they don’t die! Realizing they are now rogue enemies of their own country, Chaplin and Kendal take the sub and remaining crew on the run to take refuge on an exotic island, Sainte Marina. Here, they declare themselves a sovereign nation with nuclear capabilities and search for a way to prove their innocence. Like most shows similar to this, they’re destined to find romance and a chance at a new life.

The trailer does look intriguing… it just strikes me more like a movie than a TV show. But people who got a first glance have had good things to say, so give it a try!

Check out the trailer below, and let us know what you think!

If this sounds like a sinking ship to you, then check out these series, also coming this fall…

Hayden Panettiere ready to sizzle in Nashville
Revolution expected to be a huge hit
Welcome to The Neighborhood! BTW, it’s filled with aliens