Major Hollywood player Harvey Weinstein is the victim of a serious extortion plot: a no name actor threatened to kill Weinstein if he refused to pay over $13 million. 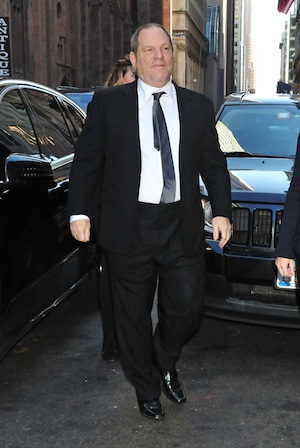 Harvey Weinstein just lived through a terrifying extortion plot. The 60-year-old Hollywood producer and chairman of The Weinstein Company allegedly received several death threats this summer by an aspiring actor named Vivek Shah when he refused to pay Shah over $13 million. The Smoking Gun website first reported the extortion scheme on Wednesday and says Weinstein wasn’t Vivek Shah’s only victim.

Shah allegedly targeted major business moguls in June and July of 2012 and might have been desperate for fame and money. The Smoking Gun reports Shah’s Facebook page shows several photos of Shah posing with Tom Cruise, Angelina Jolie, Ozzy Osbourne and Sofia Vergara. Shah’s own acting resume is bleak, with minor roles in a few television series. His biggest role was that of a “Middle Eastern Bank Hostage” in The Dark Knight.

Vivek Shah was arrested on Aug. 10, 2012 in Chicago. The Smoking Gun obtained a copy of a sworn affidavit which states Postal Inspector Joshua Mehall claims Shah is responsible for sending “extortion demand letters” over the past few months. Mehall states, “Each of these letters contained a threat to kill named members of the recipient’s family unless a large sum of money was wired to an offshore bank account.”

The Los Angeles Times reports Harvey Weinstein was not explicitly named in the affidavit detailing Shah’s alleged extortion plot but certain biographical information identifies Harvey, such as Weinstein’s place of residence and occupation. Weinstein is referred to in the affidavit as a “Connecticut resident and co-founder of a film studio.”

Vivek Shah lived in West Hollywood and remains in police custody until a detention hearing can be scheduled. His extortion scheme is a federal offense and carries a maximum 20-year prison sentence if convicted. No word yet on if Harvey Weinstein will testify in the exertion case against Shah.