We hardly think of Al Roker as vengeful and anything less than jolly and cheery. But there may be more than meets the eye to the sunny Today weatherman, as Thursday morning he appeared to take another jab at NBC and Matt Lauer, and how Ann Curry’s firing was handled. 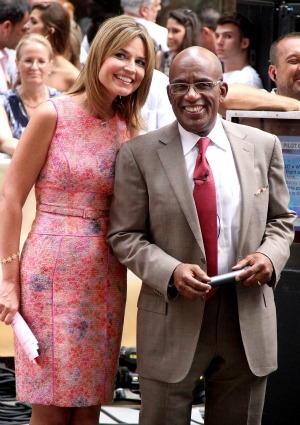 Exactly a week after Al Roker insinuated that fellow Today colleague Matt Lauer threw ousted anchor Ann Curry “under the bus,” the jovial weatherman is at it again, likening the Today team to a bunch of fakes in a wax museum during Thursday’s show.

The latest zinger came after Roker tried to explain “why” his face remained strangely frozen last week for 17 seconds (lots of bizarr-o behavior over at Today, apparently).

Curry’s replacement, Savannah Guthrie, joked that Roker was a perfect fit for a wax museum.

Al shot back: “We are a wax museum, so it all works out pretty well.”

This quip comes exactly two weeks after Curry’s equally awkward reunion with Lauer on the Today set for the London Olympics. It also comes just one week after Lauer joked, during a segment on Olympic rowing, that the tradition in New York is to throw someone into the river, which Roker followed with the stinging: “Which is different in our tradition, which is to throw one of us under the bus. That’s another story.”

TMZ quite dramatically stated: “Al Roker is doing everything he can to undermine the ‘Today’ show… trashing the anchors, sabotaging live moments… and it seems to be a part of a plan to avenge the firing of his bestest friend in the world, Ann Curry.”

But NBC has since stated, by way of the Associated Press, that at least the “under the bus” quip wasn’t about Curry; that it was just a colloquialism the team uses often during friendly banter.

While you might think that, after one too many of these quips, the peacock network will have to sit down with Mr. Roker and give him a stern talking to, let’s see: Who has the power in this situation? A struggling network or a beloved TV personality?

Roker no longer has to curry favor with the higher-ups. He can pretty much say whatever he wants, regardless of whether these zingers are a deliberate means of airing grievances about Ann’s firing, or just innocent slips of the tongue or mischaracterization of his words by the general public.