Legendary dancer and choreographer Gene Kelly, best known for the iconic film Singin’ in the Rain, is remembered during the celebration of his centennial. His widow, Patricia Kelly, talks to SheKnows about her late husband’s legacy. 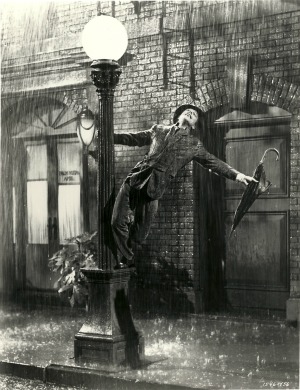 It wasn’t just the novelty of dancing with a mop, a newspaper, an alter ego, a cartoon character or an umbrella in the pouring rain that entertained fans — it was the sheer genius of Gene Kelly that mesmerized audiences around the word and has continued to captivate generations.

A choreographer, dancer, actor and director, Gene Kelly forever changed the look, feel and style of dance in the 20th century.

He is regarded as one of the greatest dancers of all time, with his choreography still revered today.

In celebration of his centennial on August 23, his wife, Patricia Kelly, remembers her late husband’s legacy and revolutionary accomplishments. She also shares intimate details about their time together.

Born in Pittsburgh, Pennsylvania, Gene Kelly grew up watching numerous vaudeville acts perform in Steel City. After graduating from the University of Pittsburgh, he enrolled in law school but later dropped out to pursue a career in the arts. After a successful stint in New York City, dancing in several Broadway shows — some even featuring his own choreography — he traveled west to Hollywood.

Gene Kelly choreographed and performed several unprecedented musical numbers in the 1940s and 1950s. It was his “Alter Ego” number from the film Cover Girl in which he danced with his own reflection, which wowed audiences. It was an impressive achievement of that era especially with the limited technology at the time.

“Now, with computers, the alter ego would be quite easy to do; you would just duplicate what you did instead of having to physically recreate it, which he said was the hardest thing he ever did,” Patricia Kelly says about the “Alter Ego” number.

“In his words, it was the turning point of his life, because from that point on, that’s what made him decide that he was going to stay in Hollywood and really try to crack the camera — what he called the ‘one-eyed monster’ and figure out how you do capture dance.”

With his talent, skills and vision, he crafted creative revolutionary choreography on the silver screen. In Anchors Away he danced with the animated cartoon character, Jerry Mouse. For his “Let Me Call You Sweetheart” number from Thousands Cheer, he danced with a mop. In his “You, Wonderful You” a rousing solo routine, he danced on a squeaky floorboard and stylishly tore up a newspaper with his famous feet in the film Summer Stock.

Patricia Kelly says her husband shared with her what he hoped his legacy would be. “He wished to be remembered for changing the look of dance on film, and it was really his preoccupation more than performing,” she says. “He often preferred not to be in front of the camera; he preferred to be behind the camera.” 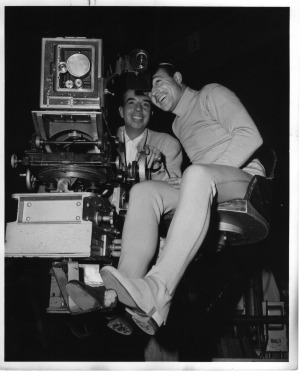 But it was his on-screen presence that resonated with fans. Instead of wearing tuxedos — a popular costume of the era for male dancers — Gene Kelly wanted to embody the look of the American male. He often wore shirts with his sleeves rolled up, slacks, vests, sweaters, hats and, of course, his loafers.

“The loafers were made by hand so it was a very supple leather so he could point his toes as though they were a ballet slipper, and yet he still looked like a guy on the street,” explains Patricia Kelly.

An avid sports fan, Gene Kelly found inspiration from sporting events and ended up blending the worlds of dance and sports for his numbers. “It was the broad, low-to-the-ground movement of so many different sports that really became the seed for the movement that you do see up on the screen.” Patricia Kelly remembers of her husband’s unique dance style.

Singin’ in the Rain

Perhaps the most popular and adored number is his unforgettable and highly creative routine, “Singin’ in the Rain” where Gene Kelly sang and danced with an umbrella while splashing around in puddles during a rain storm. It is one of the most iconic scenes in cinema, and Gene Kelly makes it look effortless. ‘

This year marks the 60th anniversary of Singin’ in the Rain, which returned to select theaters across the country for special screenings. The beloved film has truly stood the test of time and remains more popular than ever.

“They never dreamed that people would be watching these movies a year later, even two years later— 60 years later, it just was not even in their realm. They never thought these things would go on and on and certainly go worldwide and on to DVDs and Blu-rays,” Patricia Kelly says of the Singin’ in the Rain phenomenon.

“I think he recognized the ultimate iconic stature of Singin’ in the Rain, and wherever he went in the world it was what graded him because it’s what’s most known and he choreographed it.”

Among numerous events planned to mark the 100th anniversary of Gene Kelly’s birth is a special tribute planned by Turner Classic Movies. The cable station has devoted an entire day (August 23) to showing his movies hosted by Robert Osborne and special guest, Patricia Kelly. 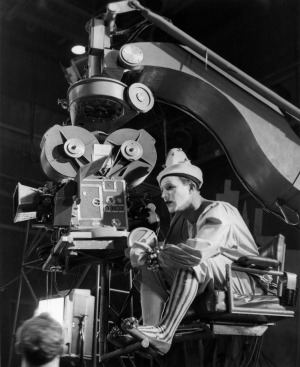 “I adore Robert Osborne, I’ve known him for years and was really honored that he asked me to participate on the day that they were going to celebrate Gene on his birthday, so I flew down to Atlanta. I get to introduce four different films: Cover Girl, An American in Paris, Singin’ in the Rain and Inherit the Wind.” she says.

Gene Kelly and Patrica Kelly: How the fell in love

Currently, Patricia Kelly is penning a forthcoming memoir about her late husband. The pair met in 1985 while working on a television special at the Smithsonian Air and Space Museum.

She was a writer and Gene Kelly was the narrator, but she wasn’t star-struck, since she had never heard of him. “It’s astonishing to me now that I had never even heard the name [Gene Kelly] and I’d never heard of Singin’ in the Rain!” she says, laughing.

Patricia Kelly recalls their first meeting, “My pet study in graduate school was etymology, the study of the origin of words, and Gene’s pet study was in poetry, so we just sat in this room and played word games and quoted poetry back and forth,” she said, adding, “Looking back I think it was the perfect way to meet him because I wasn’t knocked out by the guy on the screen, I got to know the guy first.”

Patricia Kelly says a few months later, Gene Kelly arranged for her to travel to California to write his memoirs, “I was only supposed to come for a couple of weeks, and we got married five years into it — so happenstance — never could have predicted that one.”

The couple married in 1990, when she was 31 and he was 77. Patricia Kelly says her husband was a true romantic at heart. She also has fond memories of their weekly Saturday dates. 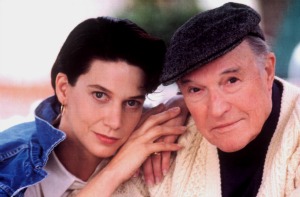 “We’d usually go to Spago, Wolfgang Puck’s restaurant, and we had a two-top table in the corner and we really looked forward to it, and after we would go to the piano bar at the Peninsula Hotel. At that time we were almost the only people in there with the piano player, and that was one of Gene’s great joys — to sit and listen to a great pianist and the songs of his youth,” she recalls.

Determined to stay true to the dancer he was, Gene Kelly set out on a courageous quest that ultimately produced a style of dance that was all his own. His acclaimed original contributions to the world of dance have been preserved in films for decades to come.

Gene Kelly was an artist way ahead of his time. This handsome icon’s natural athletic ability, charming personality and prolific choreography made him a legendary star whose light will continue to shine bright.