The butt of many a joke over her sloppy and sometimes perplexing (lack of) fashion sense, which some suggested was all a strategy to tick off then-hubby Tom Cruise, Katie Holmes is now taking the big step of showing her fashion label at New York Fashion Week next month. 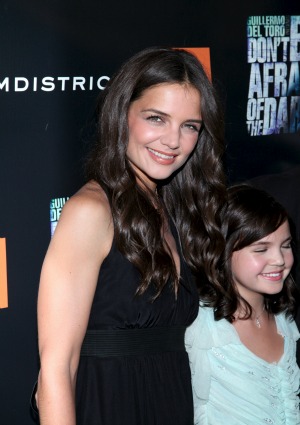 Katie Holmes reportedly has plans for a big show, after her fashion label, Holmes & Yang, has been plucked from relative obscurity to appear in front of the biggest names in fashion at New York Fashion Week in September.

“This is a big deal for Katie to show in the tents, under the full attention of the fashion editors and the glare of the media scrutiny,” a source told the New York Post. “They could have done a small show elsewhere, so this proves she and Jeanne are very serious about their business.”

The Post reports, following the divorce, Katie has “refocused on her career.”

The publication notes she’s starring in a play in November and two movies are slated for 2013.

The fashion label was birthed in 2009, thanks to a collaboration with stylist Jeanne Yang.

The 33-year-old has previously characterized the collection as “basics” with a wearable “twist” to suit everyone from “rock stars to heads of state.”

Holmes & Yang will be rocking out the collection roughly midway through the show on Sept. 9.