Kristen Bell and Dax Shepard want to do things a bit backward: Kids, then marriage (maybe). 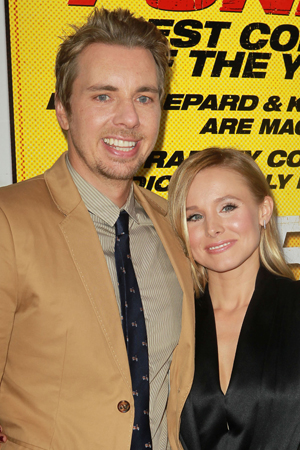 It sounds like Kristen Bell and Dax Shepard are taking a play out of the Brad Pitt and Angelina Jolie guide to marriage. The pair — now co-starring together in the comedy Hit and Run — said they don’t plan to change their status from engaged to married until all gay and lesbian couples can marry.

“Once it’s official and everybody stops appealing it the minute before it passes, we’ll get married,” Bell, 32, told Larry King in a new interview. “I’ll feel more comfortable having a party — or whatever we have, if anything — if half of our friends who are homosexuals (can celebrate). It’s just kind of rude to invite everyone to a party for a rite not everyone can hold.”

Shepard proposed to Bell in 2010 — and he was the one responsible for her adorable sloth meltdown earlier this year. We think they’ll make great parents, it’s just too bad they won’t have them until marriage.

Well, no so fast: They’re planning on kids whenever it happens.

“We’ll have them out of wedlock,” the 37-year-old Shepard told King. “We’re not worried about that.”

“We’ll apply the appropriate paperwork for wills and security and such, but when he gave (the ring) to me… that meant more to me than proclaiming it in front of a group of people,” she said. “That doesn’t feel very significant to me. The moment that we shared when he proposed felt like the agreement.”