These are the Editors’ Choices for the 2012 Video Music Awards nominees. The awards take place on Thursday, Sept. 6.

fun. is a band from New York City that is only a few years old, but they started with plenty of built-in fans. Nate Ruess of the band was formerly of indie-rock band, The Format. In 2009, the band released their first album, and in 2010, they were signed by Fueled by Ramen, the record label that started the careers of bands Panic! At the Disco, Fallout Boy, Gym Class Heroes, Paramore and others.

“We Are Young” with Janelle Monae is on their sophomore album Some Nights, which came out in February.

In 2007, Justin Bieber started posting videos of himself singing on YouTube. In a short time, the Canadian singer received more than 10,000,000 views on his covers of artists such as Usher, Ne-Yo and Stevie Wonder.

Soon, he had a manager and caught the attention of Usher and Justin Timberlake. He took Usher’s deal and signed to Island Records.

The first formation of Maroon 5 started in 1997, as a band called Kara’s Flowers. After an album and some shifting lineups, Maroon 5 debuted in 2002 with their first album, Songs About Jane. The album included the songs “Harder to Breathe,” This Love,” “She Will Be Loved,” and “Sunday Morning.” The band toured extensively in support of the album and their second studio album wasn’t released until 2007. They then released Hands All Over in 2010 and Overexposed in 2012.

Lead singer Adam Levine is also a coach on the singing show The Voice.

“What Makes You Beautiful”

One Direction is a group that first shot to fame in 2010 after coming in third on the British version of The X Factor. Soon after the show, they signed to Simon Cowell’s record label.

In 2011, they released their first album, Up All Night, and quickly shot up both the U.S. and UK charts. It also became No. 1 in 15 different countries.

Their video for “What Makes You Beautiful” has more than 100 million views on Vevo.

Barbados native Rihanna, 24, moved to the United States when she was 16 to pursue her singing career. She quickly signed to Def Jam Records and released her debut album, Music of the Sun in 2005. She released her next album, A Girl like Me, less than a year later, which included the single “SOS.”

To date, she has sold more 30 million albums worldwide and has more than 100 million digital song downloads. Her latest album, Talk That Talk, was released in November 2011. 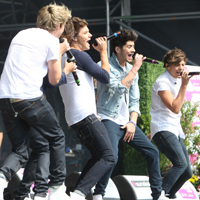 One Direction — There is no doubt that each of these artists is hot right now, but it could be called the summer of One Direction (that and Carly Rae Jepsen). When it comes to the power of teenage girls, One Direction may even beat out Justin Bieber. Both fun. and Maroon 5 have the hot band guy thing going, and Rihanna is always popular, but it may be One Direction’s day.

Linkin Park was formed in 1996 in California and their first album Hybrid Theory eventually sold 10 million albums. They were considered one of the first bands to combine rap and metal.

The band has released five studio albums, the most recently being Living Things, released in June 2012.

Coldplay was officially formed in 1998 by classmates in London. They released their first EP the same year, but shot to fame in 2000 after releasing Parachutes and the song “Yellow.” Since then they have released four full-length albums and have sold millions of records worldwide. In 2011, they released Milo Xyloto and a few months later were nominated for three Grammy Awards.

The band performed at this year’s Grammy Awards with Rihanna.

Imagine Dragons is a rock band from Las Vegas, Nevada. They have only been performing together since 2009, and released three EPs by themselves. They signed to Interscope Records in 2011, and released their first EP, Continued Silence, on Valentine’s Day in 2012. The single, “It’s Time,” quickly was seen on the Billboard charts.

Jack White is perhaps best known as half of the rock band, The White Stripes. The band formed in 1997 and broke up in 2011, but not before releasing six studio albums. White also had two other bands, the Raconteurs and Dead Weather.

White was named on Rolling Stone’s list of best guitarists and has appeared in numerous films, including Cold Mountain and Walk Hard: The Dewey Cox Story.

The Black Keys are a rock duo that formed in 2001 in small-town Ohio. In 2003, they signed with Fat Possum Records and released their album, Thickfreakness.

The group played and toured for almost 10 years before “making it.” Their 2010 album, Brothers, won three Grammy Awards. The album featured the song, “Tighten Up.” In 2011, they followed that album up with El Camino, which made it as high as No. 2  on the Billboard album chart. 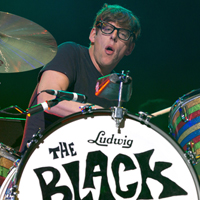 Each band in the category has something going for it, and no two are very alike. But for this competition, we think Black Keys are going to win. The past few years have seen the rise of the indie-hipster and the Black Keys are just too cool for everyone’s own good. Which means, you want to be like them. Their new album has seen great reviews from critics and fans.

Most any fan of pop culture knows Childish Gambino, even if they don’t realize it. The one-man hip-hop group is better known as Donald Glover. Glover plays the character Troy Barnes on the NBC show, Community. He has also written for, and starred in 30 Rock.

Childish Gambino released his first album, Camp, in November 2011 and regularly releases recordings through his website.

Drake is a 25-year-old Canadian singer. He started his career as an actor on Degrassi: The Next Generation, but on the side began releasing mixtapes. The project turned into his full time job and signed to Lil Wayne’s record label.

He released an EP in 2009 which hit the Billboard 150, and then recorded his first full-length studio album in 2010.

Drake also has written songs for Alicia Keys and Jamie Foxx, among others. He also played Ethan in Ice Age: Continental Drift.

Kanye West was a producer long before he became known as a rapper. He worked with local Chicago artists in the 1990s, but eventually rose to prominence in the craft. He was behind Jay-Z’s album, The Blueprint, and worked with artists Alicia Keys, Ludacris and Janet Jackson.

West released his first album in 2004. The College Dropout was followed by three more albums in four years. His albums have sold tens of millions of copies and digital singles worldwide.

Kanye West and Jay-Z make up the group Watch the Throne. The two rappers have been friends for a while and have helped each other on their own albums over the years (and you might remember West defending Jay-Z’s wife Beyonce during a Video Music Awards a few years ago. An award that Taylor Swift won).

This is Jay-Z and West’s first full album together. The album was released in August 2011.

“Beez in the Trap”

Nicki Minaj was born in 1982 in Trinidad and Tobago, but moved to Queens, New York, when she was only 5. When she was in her 20s, Minaj recorded three mixtapes, which earned her a recording contract. In November 2010, her album Pink Friday was released. It eventually went to No. 1 on the Billboard 150 chart and sold a million copies.

According to MTV, she became the first solo female artist to have seven singles on the Billboard 100 chart at the same time.

Minaj is rumored to be joining Mariah Carey as one of the new judges on American Idol. 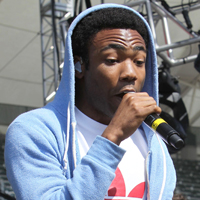 Childish Gambino. OK, bear with us here. We know Childish Gambino is the underdog here. By a lot. Watch the Throne encompasses two of the most important rappers today, on top of Kanye West being nominated individually. Nicki Minaj and Lil Wayne are also important artists in the hip-hop world.

But Childish Gambino has that underground following where he just may pull this off. His music is followed by lovers of all genres, and because he releases them as mixtapes on his website you know his followers know how to click their mouse to help him out.

Oh, and he got Tina Fey to rap on one of his songs. He deserves to win just for that feat.

Up next: More Video Music Awards nominees and editors’ picks >>