Dee Snider of Twister Sister fame is the latest musician to rip on Paul Ryan, but this tirade makes an exception. Who doesn’t think the vice presidential hopeful has a hot bod? 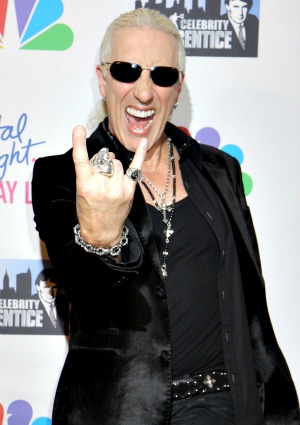 Twisted Sister won’t have Paul Ryan playing one of their hit songs while campaigning. Dee Snider has officially forbidden the politician from blaring “We’re Not Gonna Take It” while campaigning — and paid him a compliment.

Delving into the hairy situation, we start with a statement from label Razor & Tie:

“It was brought to the attention of the management today that Paul Ryan has been using… Dee Snider’s composition ‘We’re Not Gonna Take It’ in his political campaign to become the Vice President of The United States of America. Dee does not support Paul Ryan. Accordingly, Dee has released this statement to Benjy Sarlin, campaign reporter for [Talking Points Memo] in Washington, DC.”

What exactly does Dee Snider have to say to Paul Ryan, known for keeping up his intense workouts while on the road with Mitt Romney? One part smackdown, one small compliment.

“I emphatically denounce Paul Ryan’s use of my song ‘We’re Not Gonna Take It’ as recorded by my band Twisted Sister,” the 57-year-old frontman declared. “There is almost nothing on which I agree with Paul Ryan, except perhaps the use of the P90X.”

Rage Against Paul Ryan: No, you’re the machine >>

The list of campaign songs banned from Paul Ryan and Mitt Romney’s use currently reads “Panic Switch” by Silversun Pickups, anything by Rage Against the Machine and “We’re Not Gonna Take It” by Twisted Sister.

Agree with Dee Snider? Sing along so Paul Ryan hears the message loud and clear!

Any song suggestions for Paul Ryan to use now that Dee Snider and Twisted Sister are out too?