Daniel Day-Lewis strikes a pose in the first poster for Lincoln, the Steven Spielberg drama that recounts the tumultuous presidency of the former lawyer. 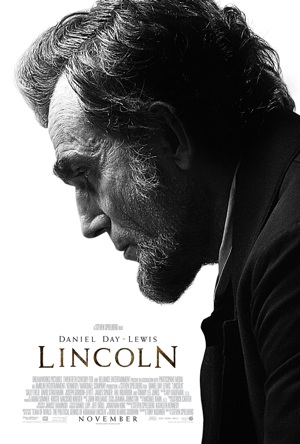 DreamWorks is rolling out the promotion for Steven Spielberg‘s new film, Lincoln. The biopic paints an intimate portrait of the former president, and stars Daniel Day-Lewis in the title role.

According to the official synopsis, Lincoln is “a revealing drama that focuses on the 16th president’s tumultuous final months in office. In a nation divided by war and the strong winds of change, Lincoln pursues a course of action designed to end the war, unite the country and abolish slavery. With the moral courage and fierce determination to succeed, his choices during this critical moment will change the fate of generations to come.”

Spielberg gathered a who’s who of talent to bring the film to life. Aside from two-time Oscar winners Daniel Day-Lewis and Sally Field — who play Abraham and his wife Mary Todd, respectively — Spielberg cast Joseph Gordon-Levitt as their son Robert, Tommy Lee Jones as Thaddeus Stevens, James Spader as W.N. Bilbo and Hal Holbrook as Francis Preston Blair.

Lincoln is based in part on the book Team of Rivals: The Political Genius of Abraham Lincoln by Doris Kearns Goodwin. The screenplay was adapted by acclaimed writer Tony Kushner, who previously wrote Spielberg’s Munich.

This will be one to watch this awards season. Many suspect that Day-Lewis’ transformation could earn him another Oscar nod. But only time will tell.

What do you think of the first poster for Lincoln?