The singer is almost five years younger than the show, but today he tweeted that he will be appearing on an episode of its 24th season. 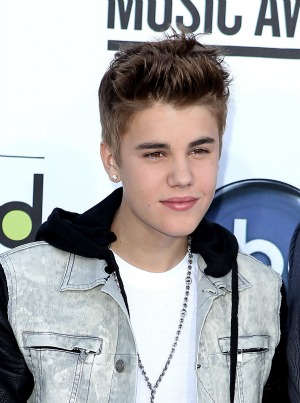 Since The Simpsons debuted in 1989, many stars have lent their voices to the cartoon, including Keith Richards, Stephen Hawking, Simon Cowell, Patrick Stewart and Paul McCartney. Just last season, Lady Gaga had a whole episode devoted to her.

So it was no surprise when the producers of the cartoon confirmed today that Justin Bieber will be in an episode of their new season. But, unlike Gaga, Bieber will only be making a short appearance.

Bieber tweeted today, “Just did a voice over for the SIMPSONS!!! #swaggy.” The tweet was deleted quickly, but the show did confirm it was true.

So, if not a full episode, what will Bieber’s part be like?

“He tries to get into a talent show that Bart is playing piano in, and they won’t admit him,” executive producer Al Jean told Entertainment Weekly. “Draw your own conclusions.”

The 24th season of the show kicks off in September, but Bieber’s episode won’t air until 2013. The episode is called “The Fabulous Faker Boy.”

As for Bieber’s part, don’t expect the episode to be about him. But Jean insists you should still watch the entire episode.

“It’s a cameo,” he said. “But all of his fans should watch every minute of the show, before and after he’s on.”

Even with the short part, you can be sure all Beliebers will be watching the entire episode intently.

To make Bieber’s appearance even more of a big deal, here’s a thought: The Canadian singer was not born until more than four years after The Simpsons debuted as its own show in 1989, after three years of the title family appearing in animated shorts.