Kelsey Grammer seems disgusted with ex-wife Camille Grammer as he tells Oprah about the divorce. 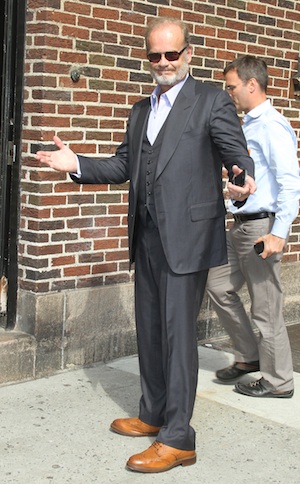 Kelsey Grammer isn’t one to shy away from voicing his opinions. In a new interview with Oprah on an upcoming episode of Oprah’s Next Chapter, Kelsey discusses everything from his career to his love life. In a preview of the Grammer-Oprah interview, Kelsey makes it clear he has zero affection for his ex-wife, Camille Grammer.

Oprah starts of by summing up why Kelsey Grammer left Camille. Kelsey nods as Oprah explains, “You already knew your marriage was over. It had already gone on too long, according to you, because it was over when it started. It was a facade. But you lacked the courage to come home and say so.” Kelsey confirms and goes on, “Yeah, I did. And I did believe that I owed something to that person. That I owed fame.”

Shockingly, Kelsey Grammer goes to great lengths to avoid saying his ex-wife’s name. Oprah asks, “You won’t say her name?” Kelsey responds as he shakes his head, “No.” Oprah then asks in disbelief, “You believe you owed [Camille] fame?” Kelsey nods and, in a subtle but very sarcastic tone, explains that Camille demanded fame as payment for the miserable life she endured with him over their fourteen-year marriage.

Kelsey Grammer says, “Because [Camille] had given up so much to endure this horrible life she had with me… and I did believe what she said — and that is what she said.” Oprah continues with her interview and says to Kayte Grammer that she is painted as “the other woman who stole [Kelsey] away from his marriage and children.” As Kayte nods, Kelsey can’t resist a laugh as he responds, “Yeah, right!”

You can check out the preview below. Oprah’s Next Chapter with Kelsey Grammer airs Sunday, Aug. 26.